The life lessons of this allegedly inspirational film are undermined by its clichés. PLUS: Interview with Christian actor Lucas Black.
Russ Breimeier|September 2, 2011
Our Rating

A lot of elements are all too familiar in Seven Days in Utopia, a redemption story that indeed takes place over a week's time in the small town of Utopia, Texas. The film involves a golfer who tries to get his swing back with wise counsel from a mentor, played by the great Robert Duvall. But even he can't save this triple bogey of a movie.

Based on David L. Cook's book Golf's Sacred Journey: Seven Days at the Links of Utopia, the story is similar to Pixar's Cars. A hotshot sports star accidentally crashes in a small town, and after spending some time with the locals, he learns some important life lessons to become a better car/man. If only Seven Days, a sappy mess of tedious clichés, were crafted as well as Cars.

Duvall plays Johnny Crawford, a grizzled but kindly local rancher who helps golfer Luke Chisolm (Lucas Black), who's a wreck (so's his car) from daddy-caddy issues. Luke's dad puts too much pressure on his son, which leads to an on-course meltdown on national television.

Thus Luke finds himself in the conveniently named Utopia, where it just so happens that Johnny is a retired golf pro who also battled his own personal demons. (Yet another Cars comparison: hotshot mentored by a wise local who happens to be a retired legend.) He promises to improve Luke's game if he'll just stay in town for the week. At the town festival that evening, Luke wonders if he should take Johnny up on his offer—and the film immediately responds with fireworks in answer to his question. 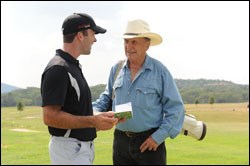