Look at the word unbroken.

An uncommon word that begins with a common prefix. Un- is so familiar that its meaning is rarely considered. Those two little letters just mean "not," don't they?

It makes good sense, then, that Laura Hillenbrand used the prefix in the title of her new biography, Unbroken: A World War II Story of Survival, Resilience, and Redemption. The title pays tribute to the strength of the book's subject, Louis Zamperini—an Olympic distance runner, war hero, and former POW who survived outrageous challenges, beatings, and torture with body and spirit in tact. Zamperini, in fact, is still living, at age 94 in Hollywood, California.

Hillenbrand's book has garnered much popular and critical acclaim, but some reviewers have complained that her choice is "generic," even a "goofy mushball of a title." "Not broken? That's the best you could do?" They seem to sneer at the word, insisting that Zamperini's life story is so extraordinary that it deserves a grander title.

Best known for Seabiscuit, another story of unlikely resilience, Hillenbrand has noted that she doubts that any person in history besides Zamperini has found or will find himself in the position of grasping the underside of a failing life raft while beating away sharks with warplanes shooting at him from the sky.

Perhaps those who criticize Hillenbrand's title are correct, that it should contain a more startling adjective than the one she chose. But I'd like to take a closer look at what those two letters, that little prefix un- can do.

You see, it has two meanings. 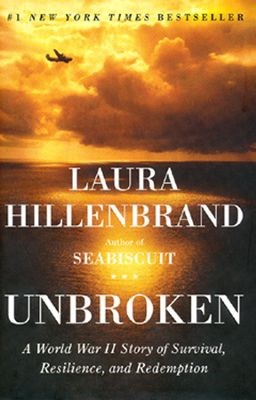