This Is Our City

How local Christians are building human capital through public health—one man at a time.
Katelyn Beaty|April 24, 2012

On the fourth floor of the Health District Building in downtown Richmond, Donald Stern's office is beginning to resemble a library with an unusual collection. On his desk, next to new editions of the World Health Report and Control of Communicable Diseases, are Race Matters by philosopher Cornel West, Was Bill Cosby Right? by Michael Eric Dyson, and the Moynihan Report, a controversial 1965 federal document that detailed crumbling relations in the African American family. Nearly 50 years after its publication, Stern says, it has proven "prophetic" in the former seat of the Confederacy.

Stern became Richmond's public health director after his boss urgently called him there in December 2006. He had spent the previous 25 years in some capacity in Virginia public health, tracking infection rates, administering flu shots, inspecting nursing homes—"I've done about every job a physician could do in Virginia public health," says Stern, an affable, mustached doctor trained in maternal and child health. But all that, he says, "was God's means of preparing me for my most challenging role," centered in Richmond.

"Here's some light reading for you," Stern says as he hands me Winning the Race: Beyond the Crisis in Black America , historian John McWhorter's landmark study on the effects of welfare reform since the 1960s. "Forty years of public policy around poverty and the war on drugs have, in McWhorter's words, sent the black community to hell."

That hell was clear to Stern when he, like any good doctor with a new patient, examined Richmond's vital signs. "Every health status indicator was worse than the state average. Then we looked at the indicators that were twice as high as the Virginia average: teen pregnancy, infant mortality, ... 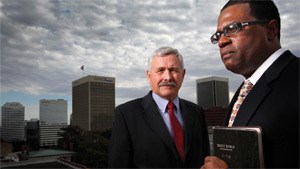