A lush film with an adorable young star is slightly marred by cheesy narration.
Camerin Courtney|April 20, 2012
Our Rating

For the past three years, Disneynature has released a new nature documentary on Earth Day (or pretty close to it), including Earth (2009), Oceans (2010), and African Cats (2011). This year, their lens lands on the African rainforest and an impossibly adorable chimpanzee named Oscar.

Oscar lives with his mom, Isha, in a gorgeous setting—swinging from a playground of trees above a carpet of lush vegetation and glowing mushrooms that light the night. But his community spends their days on an endless, life-or-death hunt for food—digging bugs out of logs with sticks, cracking nuts open with heavy rocks, and staging stealth missions across the jungle into rival chimp territory to acquire the sweet fruit of a new tree. And occasionally hunting monkeys (which chimps apparently eat!).

It's fascinating to watch the dynamics of the mother-son and community, led by wizened group leader Freddy, to see these animals fashion and use tools, and to observe the order and wonder of it all. It's especially meaningful for those who know the One who put it all in motion. It's perhaps most fun to watch all this through the uber-cute eyes of Oscar.

Tragically, the harsh realities of the rainforest leave Oscar orphaned (this is not a spoiler—it's made clear in the trailer—but what is it with Disney and tragic orphan stories), and he must renegotiate his role in his community. In fact, his life depends on an adult in the group—in this case, Freddy—taking him in, a process more complicated and tenuous than it sounds. This process and its outcome are compelling and give this documentary an interesting story arc you simply don't find in most nature films.

As expected, the footage is gorgeous. Shot under the direction ... 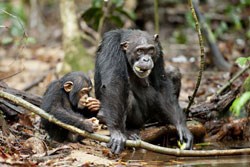