Stylish spy thriller is all fight but little punch.
Brett McCracken|January 20, 2012
Our Rating

Haywire is a smart film, but it isn't profound. It's smart in the sense that it exemplifies intelligent, self-aware filmmaking and tells its story quickly and directly without condescending to the audience. But Haywire isn't interested in probing the mysteries of human behavior or complexities of existence; rather, it's interested in portraying the most stylish and fun-to-watch actions scenes possible.

From the first minutes to the final shot, Haywire is about one thing: Gina Carano kicking butt. Carano—a mixed martial arts superstar and former American Gladiator—plays a covert ops specialist named Mallory Kane who works contracted jobs for government agencies. As the film opens, she's on the run—pursued by the very agency she's been working for. Much of the film finds her in various states of fighting, escaping, or exacting revenge on her pursuers. We jump back and forth in time and across the world—San Diego, Barcelona, Dublin, New York, New Mexico, to name a few—as we unravel, alongside Mallory, the corruption and conspiracy within her special ops outfit.

Director Steven Soderbergh has a knack for stylishly reinventing or riffing on established Hollywood genres (Ocean's Eleven did it with the heist genre; Contagion did it last fall with the disease disaster genre), and Haywire is very much an experiment in the Bond/Bourne spy thriller genre. Soderbergh's main twist on the genre is that his protagonist—every bit as suave, smart and lethal as Bond/Bourne—is a woman. And yet this isn't as novel or attention-grabbing as you might expect it to be; it's simply a fact about the character. In every important way (including seducing her colleagues), Mallory Kane functions just like her Bond/Bourne-esque ... 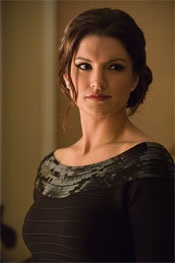