This movie about high-flying African-American pilots during World War II goes down in flames.
Lisa Ann Cockrel|January 20, 2012
Our Rating

They were known officially as the 332nd Fighter Group of the U.S. Army Air Corps, and more popularly known as the Tuskegee Airmen. Those lucky enough to fly with them called them the Red Tails for their brightly painted P-47s. They were the first African-American military aviators and they took flight during World War II when many of their stateside counterparts were unable to drink out of water fountains, use restrooms, or swim in pools that bore signs reading "whites only."

"Whites only" was the attitude when it came to flying as well. Black men were considered constitutionally unfit for the rigors of flying and so had to fight WWII on two fronts—against the Axis alliance and against prejudicial brass in Washington D.C. who wanted to shutter the Tuskegee program that created a pool of pilots for the military to train. It's these two fights that executive producer George Lucas has labored for more than 20 years to bring to the big screen—a labor that becomes reality today with Red Tails.

The aerial action is fast and furious from the opening credits, showing German and American pilots dogfighting in the European theater. But the heroes of our story are miles away, doing routine patrols of quiet stretches of countryside in their woefully outdated planes, unable to join the fighting because of the color of their skin. We're introduced to two of our central characters—Marty "Easy" Julian (Nate Parker) and Joe "Lightning" Little (David Oyelowo)—and the tension of their relationship when they encounter a slow-moving train that they suspect of carrying German military equipment As the ranking officer, Easy directs his squadron to engage the train with caution. Lightning defies orders, makes a more dangerous ... 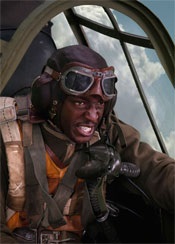