A magical and extraordinary revelation overflowing with misplaced hope.
David Roark|June 29, 2012
Our Rating

Like the world it so carefully constructs, Beasts of the Southern Wild is both broken and transcendent—a magical revelation overflowing with misplaced hope. Writer-director-composer Benh Zietlin spins his first feature film, a fantastical mishmash of the real and surreal, like a creation myth. It begins in "The Bathtub," a pseudo-utopian community paralleling southern Louisiana. There, an array of strange and unique characters, including father and daughter Wink (Dwight Henry) and Hushpuppy (Quvenzhane Wallis), live in harmonious bliss, celebrating "more holidays than the whole rest of the world." But, as quickly as you can say Genesis 3, this paradise breaks. As Hushpuppy says in a voiceover, "The whole universe depends on everything fitting together just right," but everything isn't right. Wink learns that he is dying, and a storm—reminiscent of recent hurricanes such as Katrina—floods the land. It's the fall of a place and a people, and the moment where those people yearn to be raptured back home—to return to the way things used to be.

For Wink and Hushpuppy, though, there's no foreshadowing to one who will someday crush the head of the serpent and make all things new again—there's no hope of a savior. Yet Beasts sets its sights on hope. Through Hushpuppy's optimistic perspective, which comes alive through her poetic, sometimes nonsensical voiceovers that invoke the likes of David Gordon Green's George Washington and Terrence Malick's Days of Heaven, Zietlin pits his film against all ideas of cynicism. Sure, he portrays a dim and difficult reality filled with muck and mire—in one scene we watch a group of mystical hog-like beasts eat one of their own—but he contrasts it with a ... 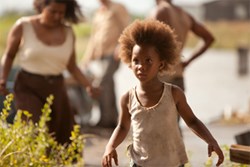