When ABC announced its intent to create a show called Good Christian Bitches—based on the popular Kim Gatlin book of the same name—some faith-based groups complained that such a title has no place on prime time television. ABC proceeded as planned, albeit with a concession: They changed the title to Good Christian Belles. Now they've changed it again, settling on GCB, but with no explanation of what the letters stand for. 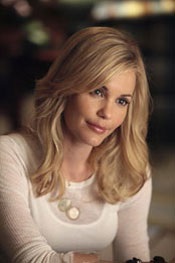 No matter. What matters is whether the show (Sundays, 10/9c, premiering March 4; watch the trailer) is true to the spirit of Gatlin's book, which shines the spotlight on the ugly practice of gossip among believers—in her case, a circle of wealthy Southern Baptist housewives in a Dallas suburb. Gatlin has said that her novel, based on her true experiences, doesn't mock God, but "those of us who love God and don't always make the best choices to honor him." It isn't well written, but it boldly calls attention—even while dripping with satire—to one of the church's "lesser" sins, albeit a persistent and prevalent one.

If Sunday's pilot episode of GCB is any indication, it not only highlights the problem of gossip in the church, but underscores it with audacity and an exclamation point.

The story is told from the perspective of Amanda Vaughn (Leslie Bibb), a Dallas native who was the ultimate Mean Girl in high school. But she'd spent most of her adult life in California raising a family—until her philandering husband is killed in a car wreck in the pilot's opening scene. Amanda and her teenage kids, Laura and Will, move back to Dallas, where her wealthy mother welcomes her daughter home with open arms. As Amanda pulls into the driveway, former schoolmate Carlene Cockburn (Kristin Chenoweth) glares through a pair of binoculars from across the street. She picks up the phone, calls a friend, and smirks, "Well, well, well, Amanda Vaughn's back in town." The voice at the other end of the line says, "And she's single, too!"

And just like that, the gossip machine is already overheating. Several more women—all ridiculously wealthy suburbanites—join the fray, but Carlene eventually ends it with self-righteous smarm: "Ladies, it is not appropriate to speak of such things on the phone." Pause. "I'll see you in church." It's clear where this conversation will resume. 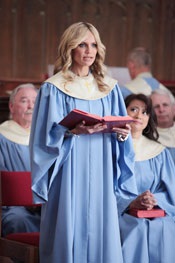 Chenoweth, a multitalented Christian who has starred on TV (The West Wing) and Broadway (Wicked), steals the show as the ultimate, well, you know what that "B" stands for. With her brazen hypocrisy, Carlene—a faithful churchgoer who cites Scripture and has "HOLY ONE" on her license plate, but is also the biggest gossip of them all—personifies GCB's premise. She's always jumping to conclusions, assuming the worst in people—and is the first to spread it around. But on Sunday mornings, she's singing hymns in the choir and praying aloud before the congregation. Even then, she finds a way to slander her neighbor. Ah, but haven't we all, in the name of "prayer requests"?

The hour-long show has something of a Desperate Housewives-for-Christians vibe. It's both a soap and a comedy—often laugh-out-loud funny, sometimes cringe-inducing raunchy. There's plenty of emphasis on the "B" in the title, but it's not completely devoid of "G" or even "C." One woman who initially joined the attack on Amanda begins to soften, hinting at some transformation. And Amanda, more concerned about character than appearance, shows great love for her family and (mostly) exercises patience with her peers. She thanks God for a "second chance" and his "blessing of forgiveness."

Viewers can decide for themselves if they think these women are "good" or "Christian," though the b-word certainly applies to many. But it would behoove all of us to at least ask ourselves, "Do I ever do that? Am I guilty of gossip?" May we, as well as these fictional characters, ever gravitate more toward the "G" and the "C," and away from the "B."

1 of 2
Leslie Bibb as AmandaKristin Chenoweth as Carlene