The 'quiet' Beatle was driven by spiritual pursuit while living in the material world.
Dave Urbanski|May 1, 2012

After the Beatles broke up and went their separate ways, George Harrison fretted about transitioning to a solo career—but that anxiety was often quelled by a deep, inner faith.

"I'd be going through some private nightmare," he tells longtime friend Ravi Shankar in George Harrison: Living in the Material World, newly released to DVD. Harrison would wonder how he could possibly enter a Krishna temple in such a frenzied, depressed state: "But then I'd go, and I'd always walk out of there thinking, 'Oh, thank you Lord.'"

It's just one of many insights into the "quiet" Beatle's intense spiritual search in the compelling, cradle-to-grave documentary by Martin Scorsese. The 3½-hour film aired on HBO last fall.

Harrison may have kept a lower profile than fellow Beatles John and Paul (and even Ringo), but his inner world was anything but static. Harrison's spiritual quest tellingly commenced during the Fab Four's apogee (when all the fame and fortune wasn't bringing him peace) and continued in some respects for the rest of his days.

While Scorsese's film does a splendid job underscoring how greatly Harrison's spiritual journey informed his uncommon convictions about life, death, and the soul, more than half of it focuses on the well-trod territory of George's early life through the Beatles' breakup. Since I eagerly gobble up new stuff about the Liverpool lads whenever I can, I don't mind that all. And even though Scorsese fills the screen with a bevy of George's personal photos, some rare footage, and new interviews with the likes of McCartney, Ringo, and Eric Clapton, much of the doc's first half could have been shortened and positioned to set up Harrison's far more compelling post-Beatle life. 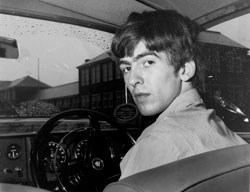