Romney campaigns on keeping 'God' on our coins (and in his heart) after Democratic Party debate.
Tobin Grant|September 10, 2012

Republican presidential candidate Mitt Romney told a crowd of supporters Saturday that he would not take "God" out of the pledge of allegiance or off U.S. money.

The comments were a reaction to a controversy during the Democratic Party convention. The original party platform omitted any reference to God. The Democratic Party acted quickly to fix their platform Wednesday after it was reported that there was no mention of God in the document.

The convention revised its platform by replacing its plank on hard work with language from the 2008 platform: "We need a government that stands up for the hopes, values, and interests of working people, and gives everyone willing to work hard the chance to make the most of their God-given potential" (emphasis added).

Conservatives such as Family Research Council president Tony Perkins called the omission a sign that the Democratic Party was working to exclude religion from public life.

"This is the natural evolution of an administration eager to push God out of the public square and squeeze Him only into the four walls of our churches" Perkins said.

The "God amendment" was approved, but not without controversy. The amendment was not voted on by itself. It was combined with a plank calling for Jerusalem to remain the capital of Israel. It took three voice votes before convention chairman, Los Angeles Mayor Antonio Villaraigosa, ruled that there was a two-thirds support ... 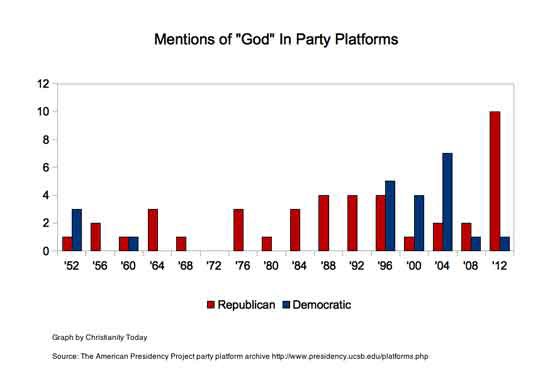