Both 42 and The Reluctant Fundamentalist deal with issues of individual and systemic racial injustice - and come to very different conclusions.
Jackson Cuidon|April 19, 2013
Image: Photo by D. Stevens – © 2013 Legendary Pictures Productions LLC
Chadwick Boseman and Harrison Ford star in 42.
Our Rating

Almost every shot in 42, the biopic of Jackie Robinson (the first African-American baseball player in the major leagues) feels like something out of a dream. Everything is soft-lit and gentle, no quick cuts or jarring effects. Each scene ends exactly when writer/director Brian Helgeland knows the scene has achieved its purpose.

And every scene in 42 has a clear purpose. Whether it's to show the baseball great (played by Chadwick Boseman) being a good father and husband, or to show the moral failure of every racist in the movie, or to illustrate the changing reactions of Jackie's teammates, every scene continues until it has delivered the full payload of whatever message Helgeland wants to convey.

What's problematic about this is that each scene is so transparently "meaningful" as to render the individual characters meaningless. They are cutouts trotted onstage to act in not a biopic, but an overarching fable of Racism Is Bad, Y'All. Jackie can't be fully human. To be fully human is to embody weaknesses as well as strengths, and Helgeland seems terrified of complicating matters.

Every racist who isn't just a featured extra is a racist because of individual moral failure, or because of his or her own indoctrination by society. (In one notable scene, a young white child sits in the bleachers and, hearing his parent hurl epithets at Robinson, proceeds to do the same, all the while looking very sad and guilty.) Every upright character in the movie eventually comes around to Jackie's side. And within the context of the film, there's no other ... 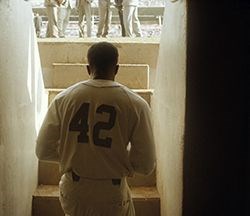