The Place Beyond the Pines and Trance are two films that grapple with difficult moral dilemmas, but aren't quite up to the task.
Alissa Wilkinson|April 5, 2013
Image: Susie Allnutt / Fox Searchlight
(l-r) Vincent Cassel, James McAvoy, and Rosario Dawson in Trance.
Our Rating

What is Danny Boyle on about? The British director's movies used to have both substance and the fast cuts and high style that he's known for—Trainspotting, 28 Days Later—but they've been sliding downhill, the stories gradually being eclipsed by cinematic and cinematographic pyrotechnics.

Not that there's anything wrong with a good entertaining explosion or scare or heartstring-tug, and Boyle has range enough to pull this off: the science fiction thriller Sunshine posed interesting questions about duty; Slumdog Millionaire, for its deficiencies, was a crowd-pleaser; and 127 Hours gave James Franco an opportunity to prove he can actually act, provided one arm is pinned beneath a boulder.

But after watching Trance, I'm scared he's stopped worrying about pesky things like stories and characters altogether and just started waving shiny objects (guns, skylines, naked people) in the audience's direction as a distraction. Trance is a manic glassy nightmare of a film, or rather, a manic glassy nightmare of a pastiche, with way too many films crammed into its 101 minutes. It's a graphic shoot-em-up. Also an intellectual thriller, the sort that tries to be Eternal Sunshine of the Spotless Mind but winds up just being one of those movies that jumps out from behind the couch and yells, surprise! It was all a dream, maybe?

Simon (James McAvoy) is an art auctioneer with a high-stakes gambling problem who conspires with some art thieves (led by the eternally-creepy Vincent Cassel as Frank) to steal a Goya painting and pay off his mountain of debt. There are altogether too few films about art theft, so this premise seems promising—that is, until Simon gets knocked on the head by ... 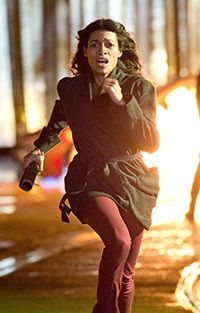