Most of what's good about American Hustle has nothing to do with plot. It does have a plot: as its title cards proclaim, "some of this stuff actually happened," in the infamous FBI Abscam sting that took down a number of elected officials in the 1970s and 80s. In this version of the story, con man Irving Rosenfeld (Christian Bale, paunchy and middle-aged with an epic combover) meets and falls in love with Sydney Prosser (Amy Adams), a former exotic dancer who's looking for a way out of her life and into a better one. The two of them team up to do some small-time swindling, but they run into some roadblocks. One is slightly unhinged FBI agent Richie DiMaso (Bradley Cooper) trying to scale his own career ladder. Another is Rosenfeld's slightly unhinged wife, Rosalyn (Jennifer Lawrence), whom Rosenfeld both can't stand and can't quit. 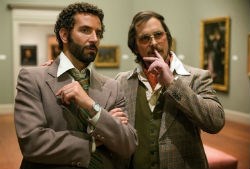 DiMaso brings in the two con artists and offers them a deal: if they help him take down some bigger fish on corruption charges, they'll get off the hook for their more petty crimes. And so they cook up a scheme focused on Carmine Polito (Jeremy Renner), the least corrupt politician you'll ever meet, mayor of Camden, family man, and a true public servant. He's campaigning to rebuild Atlantic City, and DiMaso, Rosenfeld, and Prosser cook up an entrapment plan to use Polito as a puppet in bringing down more prominent politicians.

But the course of con and cop cooperation never did run smooth. Rosalyn is getting more and more jealous, and also getting cozy with one of the goons in league with both the casinos and the mobs. DiMaso keeps hitting walls in the form of his kind but steely boss (an excellent Louis C.K.). Prosser and Rosenfeld's relationship is on the rocks. And Rosenfeld's friendship with Polito is making him grow some kind of conscience.

At a press conference in New York recently, director and co-writer David O. Russell (The Fighter, Silver Linings Playbook) freely admitted that this script isn't all that true to the actual events. "I'm not doing historical drama," he said. "That's for another director to make." The dividing line between fact and fiction might be interesting to audiences, but what Russell finds more interesting is his characters: "I'm making cinema, so I'm going to tell the best myths, the best stories, the best operas from an amalgamation of true events that inspire me and true characters and fictional imagination."

What Russell's pointing out is something filmmakers have known a long time: telling "true" stories can be hazardous at the movies. Audiences like it and will let you get away with a lot if they think what they're watching is based in reality (the Coen brothers famously capitalized on this in Fargo, which they claimed was based on a true story but in fact was entirely made up).

But most biopics and historical epics end feeling either contrived or unsatisfying, because the facts of real life rarely fit the sort of storytelling arc that the form of cinema demands. Stories feel like they lack a real ending precisely because in real life, they do. The past is always subject to the future.

Russell's solution for American Hustle was to focus more on creating characters than sticking to the facts of the story. In another interview, he said, "If I told you what it was based on in truth, you'd be surprised what was true and what wasn't true . . . what is true about these actual people at that actual time, and what did we fictionalize for the sake of cinema and the story." The characters are what matter most—the story is there to serve their development: "Because I care about what's going on in the people's hearts and use the story almost as a blowtorch to move the emotion of the characters, and to get to know these people, who are really making decisions in their hearts about who they want to be. That's what exhilarates me when I go to a movie."

By that standard alone, then, American Hustle is a resounding success. In the hands of a lesser cast, these characters would certainly have slipped into caricature, beginning with Christian Bale's elaborately contrived hairdo, which we watch him sculpt in painstaking detail in the very first scene. (The whole thing plays a little like Hair and Hard Knocks: The Movie; Jennifer Lawrence's hair is a wonder to behold at all times, surfers dream of waves with the height of Jeremy Renner's pompadour, and we even get to see Bradley Cooper in tiny little curlers.) But luckily, when you put together a cast this good and then let them do what they do best, it can't help but work.

Russell has managed this well in the past; his 2010 boxing film The Fighter (which also starred Bale and Adams alongside Mark Wahlberg and Melissa Leo) was as good a family drama as you could imagine, and last year's Silver Linings Playbook (which starred Lawrence and Cooper) won praise from critics and audiences alike for sidestepping romantic comedy conventions and delivering something truly original. And this is a fun movie to watch, often funny, sometimes hilarious, and a little drunk on its own excess. (The awards bells are already ringing.) 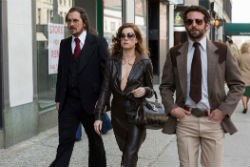 As others have noted, American Hustle feels an awful lot like it was directed by Martin Scorcese, all gritty and flashy and full of mobsters and big accents and quick camera zooms. But what it doesn't have is the gravitas of a great Scorcese film, and that's where American Hustle suffers—it's a con-man film, but we've seen a lot of those. There's nothing particularly innovative or interesting about this one, though when you start watching it you think there ought to be, since the performances are so good. But nope: all proceeds as planned. People learn lessons and get their comeuppance, more or less, even if they get away with more than they should. You can almost guess how it will end. The only question is exactly how and when the inevitable twist will occur.

That's the film's failure, because it's clear it could have been a little better—and it's no use saying that Russell was restricted by his material, given his avowed commitment to character over story. There are some terribly interesting questions about corruption and commitment and conscience and the masks (or hairdos) we make for ourselves to con ourselves into thinking we're better than we are, but they're more gestured at than explored. So though American Hustle has some very bright moments (Jennifer Lawrence cleaning her home in giant yellow rubber gloves singing "Live or Let Die" springs immediately to mind), the end result still manages to lack its potential luster.

If you like Scorcese, then you'll be okay with American Hustle; if you don't, stay away. There's plenty of bad language from the get-go, including all the usual profanities used in all the usual ways. Two female characters kiss in a rather surprising moment. There are incredibly plunging necklines throughout, along with other items of clothing that leave very little to the imagination. In a flashback, one character is shown as an exotic dancer (though she is wearing just enough to keep her from being nude). Husbands and wives and fiances are cheating all over the place and nudity is implied. Two characters almost have sex in a bathroom stall at a club, and though they don't, the people outside the stall yell things at them that imply that they do. Moments of peril are, of course, a given.

Alissa Wilkinson is Christianity Today's chief film critic and assistant professor of English and humanities at The King's College in New York City. She tweets at @alissamarie.