Spoiler alert: In Zal Batmanglij's recent political thriller The East—which may be this summer's best movie that you'll have to watch on DVD, because it lasted barely a week in your local theater—a young agent for a private security company infiltrates a leftist terrorist group and is able to take them down against great odds . . . because God answers prayer.

That may sound like a summary for some corny Message Movie, but if there's a message in The East, it's more about the evils of corporate greed or the complications of radical idealism. Efficacious prayer isn't The East's message; it's just the film's basic narrative assumption. A first-act prayer determines The East's trajectory no less than it drives Frank Capra's beloved holiday noir It's a Wonderful Life (1946). Remember how It's a Wonderful Life opens with the sounds of people praying for George Bailey, and how the rest of the movie is, in a way, the story of how God and an angel named Clarence answered those prayers? The East—a sexy, gritty thriller infused with the politics of Adbusters—works pretty much the same way.

Co-written by Batmanglij with Brit Marling, who also plays the lead role, the film tells the story of The East, an anarchist group that produces "jams"—acts of artful and sometimes violent terror against large corporations whose work harms people and the environment. Our heroine, Sarah, goes undercover for a private security firm and joins The East in order to undermine their work and bring their members to justice.

Along the way, she falls in love with the group's enigmatic leader, Benji (Alexander Skarsgard, who both acts and looks divine), ... 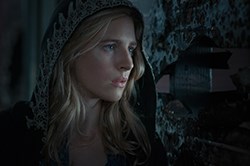