What if the self-made man wakes up one day and hates himself?
Jackson Cuidon and Alissa Wilkinson|May 13, 2013
Image: Warner Bros.

What does the self-made man love?

He is a figure we're all familiar with, the auto-constructed man, especially as Americans. Someone from Nowhere decides that, using his inherent smarts or wits or ambition, he is going to be someone, make a difference, something like that.

And so we love stories like Kurt Warner's, the supermarket worker turned NFL legend. We love it in the stories our Presidents tell about themselves. George W. Bush, son of a President, self-proclaimed "C student," pinched pennies, with Laura's help. Obama came from a broken home, and never fully knew his father. Even Lincoln began his story in a log cabin.

We love this kind of thing, the person who comes from nothing. It tells us that anyone from anywhere can make his mark in the American landscape—that anyone can change the world.

But what's it like to be on the other end? What happens if you spend your existence making yourself, only to look at your life and realize that you hate everything about it, everyone in it, that the position you're in embodies everything you hate?

Do you want to be the self you made?

Baz Luhrmann's serviceable, if lacking interpretation of The Great Gatsby would have us believe—in endless voice-overs that either inform the audience or remove the book's subtlety, depending on your perspective—that the self-invention of Gatsby (Leonardo DiCaprio was born to play this role) is all about Daisy. Tobey Maguire's Nick Carraway, in awe: "Everything—he did it all for Daisy." Gatsby's mansion and immaculate lawn, his ridiculous riches, the parties, the lavish extravagance, was all for Daisy (Carey Mulligan). He'd met her only five years earlier, ... 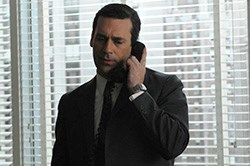