Sinister, playful, or somewhere in between: two of this week's movies look at the consequences of evil.
Brett McCracken|September 20, 2013
Image: Jaap Buitendijk / Universal Pictures

Denis Villeneuve's Prisoners begins with a foreboding prologue in which we heard the Lord's Prayer as suburban dad Keller Dover (Hugh Jackman) helps his teenage son track and shoot a deer from a distance. Photographed with quiet, slow zooms and a wintry ambience (cinematographer Roger Deakins has never been better), this cryptic scene sets the tone for the tense, contemplative, and oddly beautiful 150 minutes that follow in what is one of the year's most surprising films.

Rife with biblical allusions and ostensibly grounded in an old fashioned exploration of good vs. evil, Prisoners is more than just your standard kidnapping thriller. It explores the existence of evil, but not in the ghoulish abstract. Nor does it simply give the audience a jolt (which it does, expertly). Rather, it forces us to think about evil's complexity and everyday-ness—particularly the way it can grow and spread once it takes root, like the trees so eerily and intentionally present in so many of the film's frames.

The film's exploration of goodness and badness begins on Thanksgiving as Keller and Grace Drover (Jackman and Maria Bello) celebrate with their friends the Birches (Viola Davis and Terrence Howard), along with both couples' kids. The warmth, smiles and laughter of these early scenes doesn't last long. When the families' two young daughters go missing later in the afternoon, after going outside to play, darkness descends and a cold, wet, bleak battle with evil ensues. A local detective (Jake Gyllenhaal) arrives on the scene and attempts to unravel the mystery of the girls' disappearance. A mysterious man with a mental handicap (Paul Dano) becomes a person of interest. With every day that ... 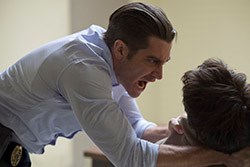