Why one Catholic writer went on a mission to do more than self-improve.
Interview by Sarah Pulliam Bailey|April 14, 2014
Image: valeriebb / Flickr

In recent years, Lent has become more than an opportunity to give up chocolate, as Christians explore ways to use the 40-day period to engage social justice issues, such as hunger, clean water, and poverty.

Bridging spiritual disciplines with mercy ministry, 31-year-old Kerry Weber took up the New Testament call to tend the physical, bodily needs of people around her in New York City. She spent the months leading up to Easter doing one act of mercy a week, living out the belief that Lent wasn't just about her self-improvement, but about God's justice and love toward her community and her church. 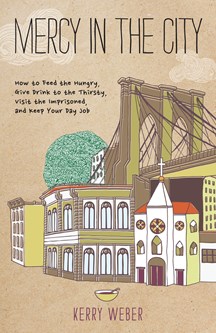 The managing editor of the Catholic magazine America, Weber shares her Lenten project and wrestles with the practical ways to pursue justice in her new book Mercy in the City: How to Feed the Hungry, Give Drink to the Thirsty, Visit the Imprisoned, and Keep Your Day Job. She spoke with Religion News Service national correspondent Sarah Pulliam Bailey.

How did you decide to embark on your mercy project during Lent?

Setting a deadline of doing these things within a certain limit forced me to really start doing mercy. Then from there, I figured out what I felt called to continue after Lent and viewed the experiment as more of a discernment process. Lent was a good time for that kind of self-reflection, answering questions like, "Where are you in your relationship toward your community. Where are you in your relationship to God? What things do you need to do to improve both of those things?" It seemed like the perfect time to do that.

For your project, you set out to complete the "seven corporal works of mercy," which you'll have to explain to most Protestants.

You'll have to explain it to most Catholics. [laughter] They're generally attributed to the Gospel of Matthew, when Jesus says "Whenever you do one of these things for the least of my brothers, you do them unto me." The things that get listed in various versions of the Gospel are feeding the hungry, giving drink to the thirsty, clothing the naked, sheltering the homeless, visiting the sick, visiting the imprisoned, and burying the dead. We can write it off, like "Yeah, we'll do these," but this is not on the periphery of our faith. These acts are central to our faith, and we forget that. It's very easy to forget that because we're busy, or because it's hard to think about that we don't really want to consider what that means for our life.

In doing those acts of mercy, were there ones that were harder than others?

On the most basic level, any one where I had to get up really early was difficult. I'm not a morning person. But on the scale of suffering, that is pretty low. This is not a horrible affront to my human dignity. But it was harder than one might think to be at St. Francis' bread line at 7 a.m., falling under "feeding the hungry."

How did doing acts of mercy connect to giving something up for Lent for you?

Ideally, anything you give up for Lent connects you back to this larger picture of where you fit into the community and how your relationship with God is going. It's supposed to be a reminder, not just to inflict pain on you. So you give up food, and you feel a hunger pang, and you think of people who are truly hungry all the time, and you can say a prayer for them, and you can be—for a very brief moment, at a much smaller level—in solidarity with that. There's value in recognizing this larger human being, the world, and it's not just a self-help idea. It's not just "I'd like to lose weight during Lent."

You wrote, "Lent, in fact, advises more than a simple attempt at self-improvement." Is there a temptation to use Lent as a self-help tool?

It can be very easy to turn Lent into this personal, almost self-serving journey, if you don't connect it to the larger experience of people in the church in the world. There's always a temptation to use Lenten sacrifice to serve ourselves rather than the greater good, or rather than to serve God through these actions. There's value in self-improvement, and there's value in wanting to be healthier, but it has to be more than that.

You wrote that it was difficult to be part of a church that was sometimes unpopular. However, Pope Francis seems to be reviving its popularity in some ways. Has he changed how the church is perceived and how works of mercy are perceived?

As I was finishing the last stages of the book, Pope Francis was elected, and he almost immediately started talking about mercy, works of mercy, and how vital mercy is. His emphasis on these acts, and the centrality of these acts to our faith, has really helped to broaden people's perspective of what it means to be Christian and what we're called to do as Christians. The Catholic Church is frequently perceived as being very rule-based, and he, while not abandoning those rules, has put the person first. He has asked people to look at these rules and look at the church in light of the messiness of our lives as actual human beings who have to live out these rules and live out our faith in a real world that isn't neat and tidy and black and white.

You asked, "How does one make the works of mercy count without burning out?" Did you figure out the answer?

Experiments helped to jump-start the presence of these acts in my life. What it also taught me is that everyone needs to find something that is sustainable. It is not sustainable for me to do one act of mercy, every week, in succession, for the rest of my life. But it is possible for me to look at these through this experience and figure out where I can contribute and how to continue those as I move forward. You can be drained by not doing, in addition to being drained by overdoing. Finding somewhere between those two extremes is what I'm working on, and I haven't figured that out but I know it's what I want to try to do.

Some people might be hung up on the idea that trying to help people can actually hurt them, especially if it doesn't lead to systemic change. How do you combat that?

When we do the works of mercy as charitable acts, they are at their core about building relationships. And when we build relationships, we're less likely to also inflict harm. When we see people who are in need, and we see the basics that they need, we're inspired to work toward that systemic change. Then you can work toward that systemic change with the knowledge of what people actually experience in mind.

For example, while passing a homeless person on the street, some people I know have little cards that show where the nearest shelter is, and instead of giving them money, they give them this card. Or they give them a granola bar. It's not about working to fight this abstract injustice, it's working on behalf of actual individuals.

How have Jesus' teachings shaped the way you done works of mercy?

At the heart of these acts is working to see Jesus in the people that we meet each day, and working to realize that we're all connected through Jesus. We have to show that same love that's shown to us to the people around us, and this is one way to do that. This is one way to live out that love, and to show gratitude for the love that we received, of which we're all undeserving. It's a good reminder to reflect that love to others. Sometimes it would be a lot easier to say "that person doesn't deserve my love, or this act of mercy," but we, as undeserving sinners, are still loved entirely by Christ.

Has your approach to mercy changed since completing your project?

I'm constantly aware of mercy, and opportunities for mercy, and the call to live that out. Once you start doing it, and once you start establishing those connections and those communities, people see in you new ways and help you to live out that call to mercy. People think of you when they hear about others doing these acts, or they see other opportunities, or they see your gifts that you might have ignored, and they help you to live those out. That's the beauty of the Christian community.