There was a life, phase after phase,
Which oft felt like running a maze
But no matter how odd, twas all planned out by God,
to Whom be all glory and praise.

One of my earliest memories is of my five-year-old self, coming home from school a few months after my parents divorced. There was a goldfish in a bowl on the kitchen counter, with a note saying something like, “I thought you might like this. Love, Dad.” 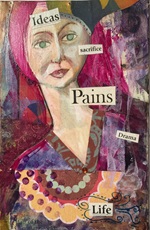 I hadn’t seen my dad for weeks, and I don’t think the slimy little guy or gal was much consolation. I remember having to flush it down the toilet a few weeks later. I watched the dead orange body spin in the whirlpool as it was consigned to its watery grave. I’m sure that must symbolize something deep, because I’m using it to begin this memoir.

Within the next year or so, my dad remarried and moved to Florida, and so I was shipped off on a plane alone to spend summers with his new wife; my dad was a workaholic and I really only saw him on Sundays.

The second hardest thing was walking into the basement and finding a whole room (albeit a small one) dedicated to his pornography collection. As you can imagine, for an eight-year-old, this was a goldmine for curiosity.

Upon returning from one of these grand vacations, I was picked up at the airport by my mother, and with her, a man I didn’t know. The first thing I said to her was, “He’s ugly.” Little did I know that this ugliness was more than skin-deep. What I also didn’t know was that this man had actually been her first husband—and was soon to become her third. And so, he was my first stepfather.

The hardest thing about having a stepfather is not so much the man himself (although that can certainly be unpleasant) but the new way your mother relates to you. She loves this new person and assumes you should love him too. Even if he is actually a complete jerk, it gets downplayed while she tells you he really, really cares about you.

The second hardest thing was walking into the basement and finding a whole room (albeit a small one) dedicated to his pornography collection. As you can imagine, for an eight-year-old, this was a goldmine for curiosity. It was also a landmine that blew up anything left of an innocent childhood, and the shrapnel exploded far into the future. There are still shards of it stuck in me today, 35 years later.

In a way, I have Playboy to thank for inspiring me to create my very first self-published zine. In between the centerfolds and all those scholarly articles that men often use to justify their subscriptions, there are comics depicting fun sexual escapades between folks like Santa and one of his sexier elves—while saggy-bosomed Mrs. Claus looks on with pursed-lipped disapproval. I tried my hand at a little soft-porny booklet and mailed it off to some boy I liked who lived in another state. Understandably, his mother sent the thing back to my mother, who then proceeded to get angry with me for “doing something like that.”

I am sure my mother was embarrassed and mortified, but I don’t remember any worried questions or concerns about why her little nine-year-old girl had already begun a career in adult publishing. I am not sure if she knew I had discovered The Basement, but the current issues of The Magazine(s) were always left on the coffee table in plain sight, so it really shouldn’t have been much of a surprise. But still, I don’t remember there being any indication that it was anything, outside of something bad in me, that brought that cute little comic into the world. This was my most shameful secret for many, many years.

This happened not long after Mom, Stepdad, and I packed up and moved from New Jersey to Southern California. Yes, I spent a lot of my childhood at Disneyland.

One day, when I was in fourth grade, I was pulled out of class without any explanation and given all these weird tests. They turned out to be IQ tests, and I found myself in a program called “Mentally Gifted Minors.” But being mentally gifted did not help me much.

My mother’s marriage was already disintegrating, and I remember sitting outside her bedroom door, listening to her beat a pillow with a baseball bat. This was a technique she’d learned in therapy that was supposed to help her deal with anger. It obviously didn’t work very well, because soon she read something called the Modern Witch’s Spellbook, and tried to kill my stepfather using honest-to-goodness magic. A dead spider impaled on a pin sat in this glass jar on our kitchen counter for a while. I’ll never understand why Stepdad didn’t ask about this strange addition to the decor. He didn’t die, but they did get divorced. Maybe the full-dress “black death spell” would have been more effective. That way my mother could have collected the life insurance, and I might have been spared being a latchkey kid when I was tossed into the Institution of Public Evil known as junior high school.

I guess it was good to be without a “father figure” for a while. I was considered weird in school, and was actually booed when chosen to be a cheerleader. I didn’t have many friends, and my so-called “best friend” was a person I now consider to have been a literal psychopath.

I admit that I was always confused regarding my moral agency and where my worth (if I had any at all) came from. When I look back I can see that my “conscience also [bore] witness,” and my “conflicting thoughts” both accused and excused me, but I didn’t understand how or what was happening.

She was even more hyper-sexualized than I was: she did actual sexual things at a young age, instead of just reading about them in her mother’s copy of Everything You Wanted to Know About Sex (But Were Afraid to Ask). During the summer between seventh and eighth grade, my mother worked, and my friend and I were left alone in the apartment with a plumber who was doing some work in the bathroom. One of those days, he took my friend in my mother’s bedroom and did some work on her, if you know what I mean. She was very proud of this, but I never told my mother. I figured she wasn’t quite ready for My Daughter’s Inappropriate Sexual Debacles, The Sequel. Besides, I really thought that I could have somehow prevented that from happening; that it was my fault it had happened at all.

I really don’t blame my mother for all this, but I admit that I was always confused regarding my moral agency and where my worth (if I had any) came from. When I look back I can see that my “conscience also [bore] witness,” and my “conflicting thoughts” both accused and excused me, but I didn’t understand how or what was happening (Romans 2:15, ESV). My incoherent childhood made it impossible for me to tell whether something really was wrong, or I’d just developed a phobia or “hang-up” about it that kept me from doing it. I knew all about hang-ups at the tender age of eleven, but now I see them as little seedlings of grace that prevented me from making some choices that would have taken my situation from bad to worse.

Samantha Blythe is a creative memoirist, and her writing and artwork can be found samanthablythe.com.

Editor's note: This is the first instalement in a 12-part series.