As Myriam, the girl who forgave ISIS, returns to school, Arabic broadcaster finds 'unconventional' way to bring education to other refugees.
Jayson Casper in Cairo|January 5, 2016
Image: SAT-7
Myriam and her friend Sandra attend school in the refugee camp.

At the Mar Elias refugee camp, where Myriam lives, half the kids say they want to be soldiers, priest Douglas Al-Bazi told20/20. The other half want to be police officers. (Myriam told 20/20 that she wants to be an architect or a doctor.)

To fill in the educational gap, last year SAT-7 Kids launched My School, a 90-minute program broadcast 5 times a week to its Arab-world audience of 9 million viewers, including 1 in 3 homes in Iraq and 1 in 4 homes in Saudi Arabia. 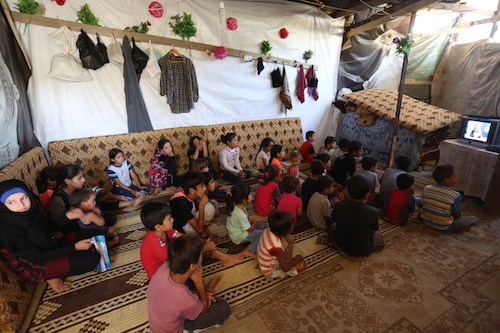 Children watch My School on SAT-7.

The My School content focuses on basic Arabic, English, and math skills, but also includes character development and an inclusive spirit. The hope is that children will be able to reintegrate into school after the conflict ends, cultivated into better citizens.

"In providing education to this lost generation of refugees, we are investing not just in their future but in the future of the Arab world," said Rita Elmounayer, executive director of SAT-7 Kids. “It is our hope to raise up a new generation who are willing to think for themselves, and produce more free and democratic societies where people can learn to live together.”

SAT-7 has received funding from the Templeton World Charity Foundation to produce content for "character development in Arab youth," and also cooperates with A World at School, an initiative of the Global Faiths Coalition for Education that aims to provide education for 59 million out-of-school children worldwide.

The local partner for curriculum development is Heart for Lebanon, which works with displaced children and runs a school in a refugee camp.

“Madrasati (the Arabic translation of My School) has the opportunity to go into homes and [refugee] tents and teach children that no other NGO would,” said Camille Melki, founder and executive director of Heart for Lebanon. “Their number is so humongous that we need to think of unconventional ways of educating them.”

Ascott said SAT-7 has always sought a holistic impact. In the wake of the upheavals created by the Arab Spring, he estimates that 25 percent of content—and up to 50 percent of SAT-7 Kids content—includes a social focus along with the spiritual.

“We’re focusing on some of the core attitudes that need to change for there to be real coexistence and long-term stability in future Arab societies,” he said. “Yes, it is a candle in the middle of a dark canopy of chaos, but it is better to reach a few million than nobody.”

Children watch My School on SAT-7.