In the David Foster Wallace biopic, the author's own words are the best part.
Jackson Cuidon|July 29, 2015
Image: A24
Jesse Eisenberg and Jason Segel in 'The End of the Tour'
Our Rating

The End of the Tour—based on the hybrid transcript/non-fiction Although Of Course You End Up Becoming Yourself by David Lipsky—shows that author David Foster Wallace is easy to represent in the abstract. In the wake of his suicide, Wallace left behind thousands of pages of fiction and non-fiction, as well as at least three collections of interviews (based on the contents of my bookshelves alone), from which to glean a rough impression of the depressive, genius author.

The film maybe hopes to reflect the mind of Wallace, and director James Ponsoldt decides that the best way to go about this is to have Jason Segel read quotes from Lipsky’s transcript. The result is simultaneously accurate and unremarkable. Segel portrays Wallace as schlubby, attention-shy, and a combination of externally friendly and closed-off; Jesse Eisenberg, playing Lipsky, plays Jesse Eisenberg.

The plot is both pretty bare and kind of structurally cringe-worthy. Lipsky—himself a struggling NYC-based author—decides to interview Wallace for Rolling Stone during the last leg of Wallace’s book tour for Infinite Jest, a book so lengthy and unrelentingly dense that its page count (1,096) has developed a kind of cabalistic significance amongst fans. The pair travel around the Midwest until returning home.

What makes the movie’s plot a bit wince-inducing is the unsubtlety with which Lipsky’s book—which is essentially a conversation between someone very well versed in existentialism and someone well-versed in what existentialism sounds like—was interjected with artificial conflict for the sake of adaptation. Although Of Course was already meandering and conversational in tone, with only tiny parenthetical ... 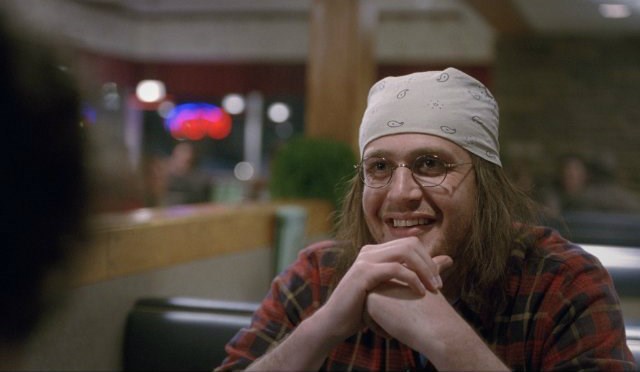