If you think contemporary praise music lacks robust theology, you’re not alone. Modern worship is widely criticized for not being Trinitarian enough, and its lyrics are often perceived to be more romantic than reverent—as if Jesus were a significant other, not the God of the universe.

A new study, however, finds that Jesus has always been the primary focus of evangelical songs. Further, traditional hymns and contemporary worship are more similar in describing the Trinity than is widely believed.

So says Lester Ruth, research professor of Christian worship at Duke Divinity School. He compared the 110 worship songs that topped the Christian Copyright License International lists between 1989 and 2015 with the 70 most-printed US evangelical hymns from 1737 to 1860. He found that both traditional hymns and praise songs are equally weak in referencing the Trinity—and equally strong in addressing Jesus.

The striking difference between the two groups is eschatology. Ruth argues that in hymns, heaven hasn’t yet reached earth. In praise songs, heaven is already here.

Hymns emphasize patience and perseverance, portraying the Christian life “as a journey of harrowing dangers and temptations that, if one stays true and faithful, will safely bring the Christian, by the grace of Christ, to a destiny of unspeakable bliss,” said Ruth. 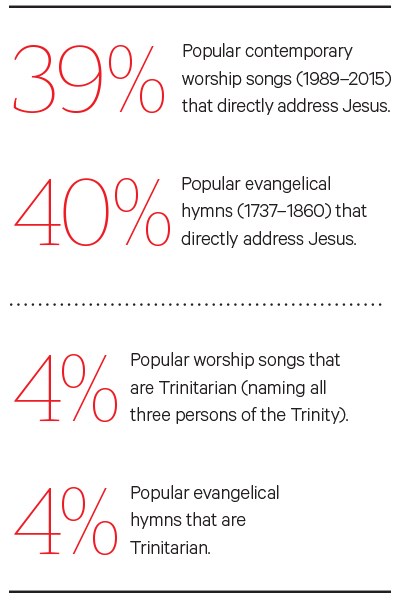