A well-acted but excessively bleak satire of the Hollywood echo chamber.
Brett McCracken|March 3, 2015
Image: Focus World
Julianne Moore in 'Maps to the Stars'
Our Rating

One of David Cronenberg’s trademarks as a filmmaker is his exploration of the body, particularly the horrors of its fragility. Through films like Videodrome (1983), The Fly (1986) and Existenz (1999), he helped pioneer the “body horror” genre. He adopted bogeyman tropes to stories where the scares come not from external monsters or villains, but from within—from the embodied self’s toxic neurosis.

His movies have a cold, nihilistic view of humanity in the modern age. Humans are often indistinguishable from animals (bursts of animalistic, emotionless violence are regular Cronenbergian motifs) or simply machines, soulless cogs in a meaningless web of money, sex, drugs, and power.

Maps to the Stars, a harsh and exaggerated look at the bleak goings-on of celebrities in Los Angeles, is no exception. With its body-image obsession, Botox body-alteration tendencies, and animalistic views of sex and survival, Hollywood is in many ways the perfect backdrop for Cronenberg’s “body horror” fascination.

Maps zeroes in on all the worst things about Hollywood (especially actors) and cynically pushes them to the limits of grotesquerie, but does it have anything insightful to offer? Unlike other “inside Hollyweird” films by auteur directors, Maps is neither beautiful (like David Lynch’s Mulholland Drive), nor smart (like Spike Jonze’s Adaptation), nor funny (like Christopher Guest’s For Your Consideration). It’s just gross.

Maps follows a series of interlocking, incestuous (both figuratively and literally) storylines involving a cadre of highly unlikable Hollywood people: an aging actress (Julianne Moore, exceptional as always), a schizophrenic ... 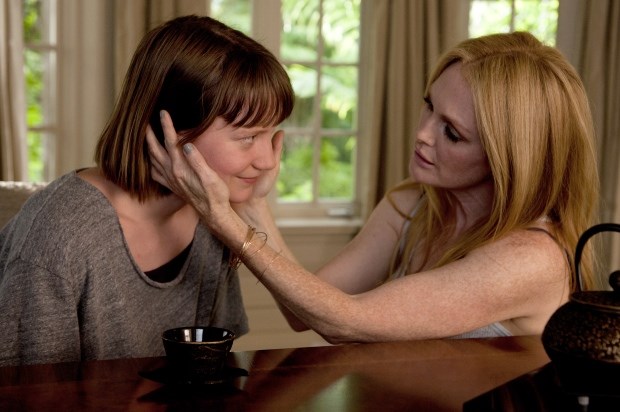