In 2017, nine people were caught in a riptide off a Panama City beach. Over 80 onlookers formed a human chain extending 100 yards into the Gulf of Mexico, rescuing the last person after just an hour. Riptide deaths usually result from people swimming against the tide until they lose the energy to resist its pull.

Similarly, Christ’s followers tread dangerous waters when trying to navigate America’s sociopolitical currents. How might churches overcome the loss of energy and resist political riptides? America’s polarization current is only part of the story. In 2016, 1 in 10 Bernie Sanders supporters voted for Donald Trump in the general election. How was that possible? According to the conventional left-right spectrum, this makes no sense. What else is going on?

A religious undercurrent, which we call “political denominationalism,” moves just below the surface of our political discourse. Mere opinions are no longer allowed; one must have unwavering convictions. Political commitments increasingly define us, yet at the same time, are increasingly irrelevant. Other forces now pull us.

Modernity affirmed an ordered world discernible through rational, scientific inquiry. It rejected the authority of religious and private beliefs in favor of progress and technological advance. Conversely, postmodernism rejected claims that history progresses or possesses any inherent meaning.

Add the contrast between modern and postmodern to the classic divide between liberal and conservative, and political perspectives get even more complicated. In the accompanying illustration below, the left-right spectrum represents America’s liberal-conservative continuum. The vertical line represents the modern-postmodern continuum. Modern liberals in the upper left quadrant espouse progress. Typified by the Clintons, their slogan might be “Change the world.” The upper-right quadrant represents modern conservatives, who emphasize responsibility. Imagine Ronald Reagan urging, “Pick yourself up by your bootstraps.” 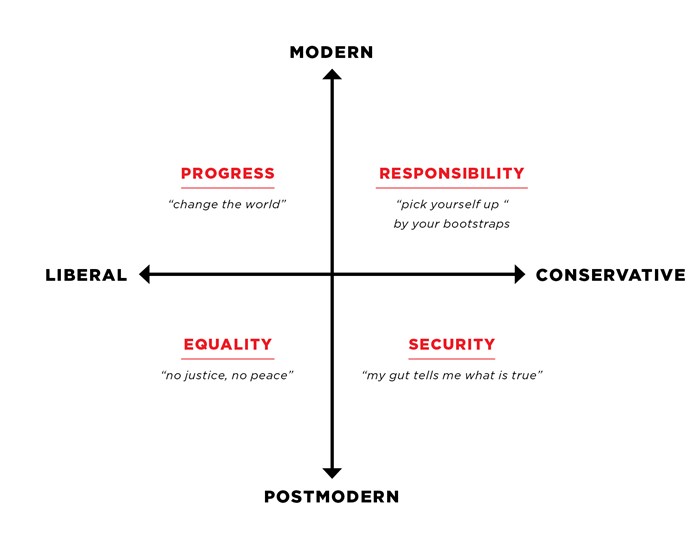 Each of these perspectives taps values rooted in Creation. In Genesis, progress, responsibility, equality, and security are aspects of a flourishing world. We are called to progress when God commissions humanity to “be fruitful and multiply and fill the earth and subdue it” (Gen. 1:28, ESV throughout). We’re invited to develop the potential embedded within creation, sinking our hands into the soil and bringing forth creation’s hidden gifts. We see responsibility when God “took the man and put him in the garden of Eden to work it and keep it” (Gen. 2:15). The world was no mere buffet for humanity. Humans were called to steward the property and family given them. The Bible affirms equality and diversity. God’s image consists of both male and female. Finally, Genesis implicitly affirms security. The garden offered safety and provision to freely flourish. People made in God’s image lived in a land without fear.

Problems arise when we isolate one value from the rest. Overemphasizing responsibility undermines compassion. How many social problems stem from factors outside one’s personal responsibility, whether family background or systemic barriers? Overemphasizing progress threatens the vulnerable. Consequences include environmental degradation and lost jobs. Unborn babies and the disabled are seen as impediments to “the common good.” Overemphasizing equality displaces “opportunity” for “outcomes.” Class warfare ensues, and shaming becomes a weapon of debate. Overemphasizing security displays a lack of faith in God. Fear of “outsiders” fuels violence and racism.

The early church didn’t fit into common sociopolitical categories. How might we engage biblical wisdom and recapture such Christ-centered, countercultural distinctiveness, pointing to Jesus, not political denominations?

Political philosopher Jim Skillen wrote, “Politics is not something done in a moment of passion with a simple moral zealousness. Politics is more like raising a family, or running a business, or stewarding a farm. It requires a lifelong commitment, patience, steadiness, and great attention to detail day after day.” Our lack of patience and endurance is a symptom of political idolatry.

Productive dialogue is slow and inefficient. Siri and social media severely hinder healthy communication. We’ve become slow to read, quick to retweet. The provocations of the irritated and ill-informed distract from constructive conversation. What’s lost in interpersonal connection is gained in impulsivity. Snarky memes make a point but not a difference.

The volume of information at our fingertips breeds impatience. The egalitarian nature of the internet undermines expertise. Intolerance for dialogue and experimentation prolongs problems. We limit the Spirit’s work to the dramatic and spontaneous. Yet the Spirit often works through our perseverance. Recall Abraham, Joseph, Moses, and Paul, among others. God can hasten change, but he often chooses the path of patience and endurance.

The Spirit is not Siri or Amazon answering prayers with one click. Wisdom is the fruit of time, not expediency. Job 12:12 says, “Wisdom is with the aged, and understanding in length of days.” Significant political problems are not solved on short timetables. A Chinese proverb adds, “Don’t fear going slowly; be afraid of standing still.”

Can churches be known for humble, wise discourse? What if we reject polarization and listen, confess sin, forgive others, and speak truth in love? Such wise and patient communities care for the entirety of God’s world, from economics to evangelism.

People will “cancel” us unfairly. Thus, Paul urged readers to have “sound speech that cannot be condemned, so that an opponent may be put to shame, having nothing evil to say about us” (Titus 2:8). Peter adds, “it is better to suffer for doing good, if that should be God’s will, than for doing evil” (1 Peter 3:17).

The church is inherently political. It challenges anyone claiming ultimate authority, which belongs solely to Christ. Allegiance to Jesus shifts our expectations and political tactics. We bear the world’s burdens, not insisting on self-preservation. The movements for civil rights and against South African apartheid provide two examples where lasting change came through steadfast suffering.

Partisanship is a convenient way to avoid suffering. Social silos ensure the sort of agreement found only in echo chambers. Polarized factions are suspicious of anyone finding common ground with rivals. Yet every political platform envisions an idealized future. We can appreciate the constructive intentions of other political perspectives. Likewise, we critique the inevitable idolatry and injustice in every political movement, perhaps even our own.

Do More Than Tread Water

Riptides weaken about 50-75 yards from shore. To escape, one must show patience and not panic. Patience does not imply contentment. Wise swimmers resist the outward tow in a steady yet measured way until they reach the shallows.

Christ’s followers need to be responsive, not reactionary. Jesus didn’t fill his disciples with romantic notions of revolution. Likewise, churches mustn’t drown in panic. Trying to avoid the political currents, we could easily get carried away by subtler social forces. We must intentionally and persistently seek collaboration with people with divergent opinions. Our labor in the Lord is never in vain.

Jackson Wu (pseudonym) is the theologian-in-residence at Mission One and author of Reading Romans with Eastern Eyes. He uses a pseudonym for reasons of security and respect for his host culture, not from a desire to mislead readers about his ethnicity.

Jim Mullins is the lead pastor at Redemption Tempe Church and co-authored The Symphony of Mission with Michael Goheen.