At the center of publishing trends toward more aesthetically beautiful Bibles and more theologically rich children’s books lies The Book of Belonging.

A Kickstarter venture by writer Mariko Clark and illustrator Rachel Eleanor, the project was inspired by Clark’s six-year-old daughter, who noticed the lack of female characters featured in her children’s Bible and asked, “Does God love boys more than girls?”

Among the best-selling children’s story Bibles on Amazon, 7 percent of the stories featured a female main character, 19 percent mentioned a woman, and only 23 percent depicted a woman in the illustrations, according to Clark’s analysis.

I know I’m not the only parent resolving these issues with homemade curriculum, Mariko Clark thought to herself. What if I just created the book I’m already creating?

The Book of Belonging, scheduled to release in 2023, is a story Bible for “modern and mindful kids.” It will feature imaginative retellings of 30 scriptural accounts—selected to feature more women than typical children’s Bibles—and unique, whimsical illustrations designed to depict a fuller cast of characters from biblical history.

“I think how the images I make will affect people’s beliefs and values,” said Eleanor, who drew the scenes in teal, gold, and orange hues. “Gaps in our perspective later grow into conscious and unconscious beliefs. … We might say we believe everyone is included, but do we show it?”

Scripture includes males and females from the beginning (Gen. 1:27), and Christians celebrate female figures like Deborah, Miriam, Esther, Mary, and Dorcas—in addition to the women involved in the gospel stories. Even when Bible stories focus on men, illustrators can take the opportunity to include women in the scenes; modern biblical scholarship and the stories themselves point to a historical context that includes women. (How many times do we see Noah building the ark without his wife?) 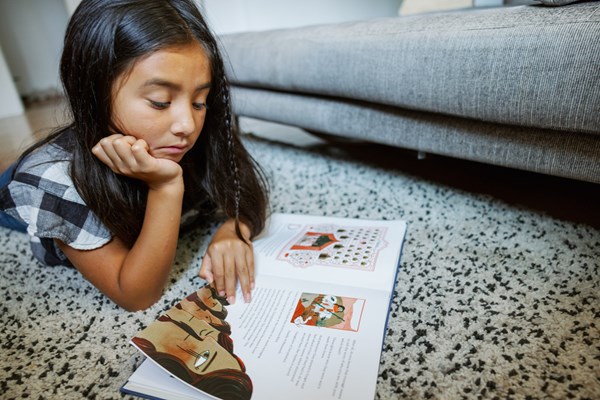 “I want my girls to know that when it comes to God’s table, they’ve always got a seat. And I want my son to know that if he ever looks around a table and doesn’t see a seat for his sisters, he’d better pull up a chair,” Clark said.

To launch The Book of Belonging, Clark and Eleanor chose to self-publish to maintain their creative vision and artfully design a book to last for generations. They used Kickstarter, a crowdfunding platform, to resource the work. To their surprise, they raised 40 percent of their funding goal on the first day of the campaign and overall raised almost $95,000, more than $21,000 over their target.

They’ve sold supporters on quality and details: The book will be printed in small batches, hardbound with a green linen and gold-foil cover.

“One of the reasons I’m excited about The Book of Belonging is because I share a passionate vision for freeing Scripture from some of the limiting expressions to which it has been confined,” said Adam Lewis Greene, who crowdfunded over $1.4 million to create Bibliotheca, a library of the biblical text, separated into volumes and free of all numbers and notes.

“Mariko saw that the most widely available Bible storybooks … can leave kids with the impression that God isn’t all that interested in those who aren’t patriarchs or kings. She’s bringing something into existence that rightly challenges that tendency.”

The crowdfunding trend can be the right option for unique projects and creators who value the freedom to decide the details.

“Kickstarter works for a particular quantity with high production value,” said Shannon Marchese, publisher at Tommy Nelson. “But there are other things to consider for a project to reach a larger market.”

The creators of The Book of Belonging said they are now talking to several publishers about future partnership. But for the first release , they are undertaking much of the process on their own. For example, it’s up to Clark, who hosts a devotional podcast, to research and consult with other theological perspectives in the writing process.

“I use a nerdy mishmash of commentaries and textbooks and secular historical sources and podcasts,” she said. “Plus, I’ve met incredible pastors, priests, rabbis, researchers, theologians, and historians. I track down everything they recommend to me.”

Publishing houses often have their own biblical experts to review materials, even down to the details of the illustrations, according to Michelle Freeman, publisher at B&H Kids.

The Book of Belonging focuses on three themes: naming (who does God say he is and what does that say about you?), wonder (promptings to help readers imagine for themselves), and contemplation (moments to experience God through silence in various forms).

One chapter follows “five fearless sisters,” telling the story of the five daughters of Zelophehad—Mahlah, Noah, Hoglah, Milkah, and Tirzah—from Numbers and Joshua. When Zelophehad died, the book’s telling goes, “they knew that even without boys in their family, God was still with them.” A “wonder moment” in a sidebar prompts readers to imagine what it was like for Moses to hear from God about the sisters.

The setup is designed to give “more freedom to explore and question, allowing kids to discover a connection to their Creator.”

The book also wants to convey the message that everyone belongs, through “diverse stories and illustrations, including lots of women, men with feelings and people of color.”

The need for more diversity in Christian children’s books has been a conversation across the industry in recent years.

“I feel like there is a trend to include all types of skin, ethnicities, males and females in Christian children’s books,” mom and book reviewer Bailey T. Hurley said. “I also think the illustrations have become more historically accurate to biblical characters than the very white pictures I grew up on.”

Freeman at B&H noted that a lack of diversity among creators (authors, editors, and illustrators) had historically led publishing teams to assume their readership looked exactly like them.

“I am grateful we are now holding our products and ourselves to a higher standard,” she said. “Our team is actively pursuing ways to connect with [Black, indigenous, and people of color] authors and illustrators and provide industry opportunities where once there were walls.”

Publishers are expanding their offerings for children, as CT reported this month, and new books are more likely to depict kids of color as well as discuss diversity from a biblical perspective. Author Dorena Williamson appreciates being able to work with Black editors who understand cultural considerations. “I have seen some increase in inclusion and diversity in children's books, especially in the Christian market. … We (still) have a way to go.”

Those interested in The Book of Belonging can be added to the waiting list for future printings; its first run will go to Kickstarter supporters in 2023.