In the field of Irish history, every turn of phrase hints at the author's spin.
Elesha Coffman

Lively medieval legend and fun computer animation notwithstanding, most people agree that Saint Patrick's fifth-century mission to Ireland had nothing to do with snakes. Reconstructing that mission, though, has quite a bit to do with establishing Ireland's relationship to the rest of Europe, as illustrated in Marianne Elliott's 2001 book The Catholics of Ulster (Basic Books).

As the title suggests, Elliott's book focuses on the identity and experiences of Catholics living in the northern counties of Ireland, not on Patrick. I focused on her treatment of him because of the holiday and because, frankly, given more than 600 pages of text and only one week in which to say something about it, I had to focus somewhere. But several striking statements in her short section on "The arrival of Christianity" (pages 12-17) showed me that Patrick's story is a pretty good place to start exploring Irish Catholicism.

Elliott, who considers herself an Ulster Catholic, teaches modern history and directs the Institute of Irish Studies at Liverpool University. In the early 1990s, she served on a commission charged with identifying roots of and possible solutions for the Irish "Troubles." She writes in her Prologue, "I hope that this book will be a small contribution to that process." Her personal stake in her subject is thus unusually clear, and her writing reflects this.

When Elliott begins her discussion of recorded Irish history, at AD 431, she notes that the arrival of Christianity was fundamental to the "new order of things" and states, "It is the only example in western history of Christianity establishing itself in a culture untouched by Roman conquest" (12). Elliott apparently excludes Scandinavia and large swaths of Europe from western history, or considers everything from military action to a rumored visit "conquest."

I can't be sure why she wrote such a questionable sentence, but elsewhere in the book she takes pains to rebut the common Protestant charge that Catholics slavishly follow Rome and therefore can't be fully trusted as citizens of any other country. If Irish Christianity began independent of Rome, Elliott can argue that the spring of independence still flows. The usefulness of the statement seems to trump accuracy.

On the next page, Elliott applies the idea of independence from Rome directly to Patrick: "Certainly Patrick's mission seems to have been unofficial and entirely British in origin and support." Accounts of Patrick's life are so elliptical (his own Confession) or overblown (later hagiography) that this statement can neither be proven nor discredited conclusively, but Elliott omits much that many people agree on.

Patrick himself was most likely British in origin, and, after being enslaved by an Irish warlord, then escaping to the Continent, Patrick returned to Britain before evangelizing Ireland. But his mission was not identifiably British; he said his missionary impulse was fueled by "a vision in my dreams of a man who seemed to come from Ireland-a vision like the apostle Paul's at Troas." Also, while Patrick does not appear to have represented Rome officially, his time on the Continent may have included monastic training, through which he would have at least been exposed to current thinking and policies from the papacy.

Elliott's presentation of Patrick may be influenced by the fact that any statement about Patrick's British roots also hints at the long succession of British exports to Ireland, about which different northern Irish communities hold starkly opposed views. As Elliott points out, Irish Catholics still resent the Protestant immigrants of the seventeenth-century Ulster Plantation; heirs of the Protestant participants naturally do not resent themselves. Northern Irish Catholics and Protestants grumble about the public assistance monies emanating from Britain, though for different reasons. Many Catholics dislike the haughty attitude attached to the dole and therefore feel justified in subverting the system when possible, while many Protestants don't think Catholics deserve assistance, especially considering that those who accept the money may nonetheless refuse to accept the authority of the British crown.

Elliott makes other claims that seem more closely tied to her perspective on northern Irish Catholicism than to historical realities, among them "There are no martyrs in the history of early Irish Christianity" (13) and "Christianity did not fundamentally alter the existing social system" (14). A bishop, Palladius, sent by Pope Celestine I to Ireland before Patrick's mission was quite possibly martyred, and Patrick's daily fear of "murder, fraud or captivity" stemmed from real risks. Further, while "fundamentally alter" is a subjective concept, Elliott herself gives several examples of significant changes wrought through the rise of Irish Christianity.

Aided by professional training, Elliott has written a history that is more responsible than the many sectarian harangues on which she reports. But she cannot extricate herself from a tradition in which selective readings of the past constantly shape the present and future. As French philosopher and historian Ernest Renan observed, "Getting history wrong is an essential part of being a nation." Whether Elliott got other portions of her book wrong, I'm not sufficiently knowledgeable to say, but she has shown-through her accounts of others and through her own example-that Renan's maxim holds true in northern Ireland.

A famous British historian reflects on the unique challenges of nationalist history: The Nationalism Project www.nationalismproject.org/what/hobsbawm.htm 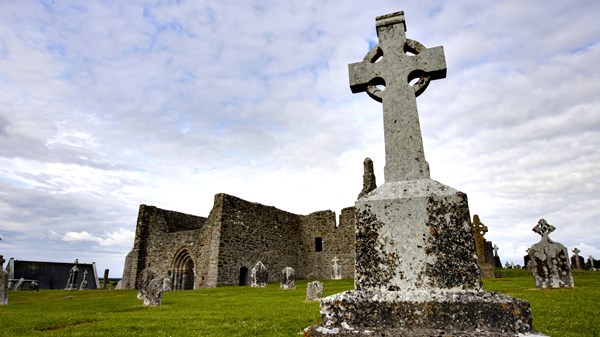