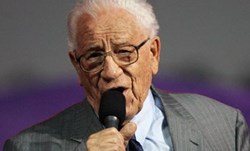 recruited him to sing on the radio program "Songs in the Night," Bev Shea has been the face and the voice most associated in the public mind with the famous evangelist.

The song most associated with Billy Graham is "Just As I Am," but Bev Shea's signature tune is clearly "How Great Thou Art." Even though nearly every gospel artist - from Elvis Presley to the Mormon Tabernacle Choir - has recorded it, it is Bev Shea's tune. Here's the story of that song.

George Beverly Shea's first contact with "How Great Thou Art" dates to 1954. But the song itself dates to 1885, when Swedish pastor Carl Gustav Boberg was caught in a thunderstorm.

It was a thunderstorm that, according to legend, struck fear into the heart of Martin Luther and extracted from him a vow to become a monk. Pastor Boberg, on the other hand, was filled with awe at the grandeur of the storm, the rainbow, and the brilliant light and bird songs that followed the storm.

Boberg sensed the power of God in that storm much the way the writer of Psalm 29 did: "The God of glory thunders, the LORD thunders over the mighty waters. ... The voice of the LORD strikes with flashes of lightning." The storm's majesty inspired Boberg (who later became editor of the Christian newspaper, Witness of the Truth, and a member of the Swedish parliament) to write a nine-stanza poem along the same lines. "I see the stars, I hear the mighty thunder, / Thy power throughout the universe displayed."

From Sweden to Nagaland

The hymn made its way to the English speaking world circuitously - via a German translation (Wie gross bist Du, 1907) and from German into Russian (1912). In 1922, that Russian version was published in America as part of a collection of Russian language hymns by the American Bible Society. The hymn reached American shores again in 1925, thanks to a Swede named E. Gustav Johnson who translated several verses of the Swedish original into English. At that time, however, the song just didn't catch on with American worshipers.

It was the Russian version that caught the attention of English missionary Stuart K. Hine who with his wife was evangelizing the Ukrainian countryside. Hine used the Russian hymn in his ministry there and developed an English version as well. The first two verses of Hine's English mirrored Boberg's awe at God's power in nature. To these he added a third verse devoted to the amazing love of God expressed in Christ's atoning death: "And when I think that God, His Son not sparing, / Sent him to die, I scarce can take it in."

The outbreak of World War II forced the Hines back to London, where they continued to evangelize among war refugees frightened by the German blitz. The promise of deliverance at Christ's Second Coming inspired Hine to add a fourth and final verse: "When Christ shall come with shouts of acclamation ..."

In 1949, Hine published the hymn in a missionary magazine that went out to 15 countries. The song spread and reached America again in 1951when it was introduced by James Caldwell at the Stony Brook Bible Conference Center on Long Island. And in 1954, the future Fuller Seminary missiologist J. Edwin Orr heard it sung by Naga tribespeople in India.

That was the same year that George Beverly Shea bumped into his friend George Gray on Oxford Street in London. Gray gave him a copy of "How Great Thou Art" that he just happened to have in his briefcase. In this 1982 video produced by World Wide Pictures, Shea recalls that meeting and the way the song began to play a role in Billy Graham crusades. (The segment dealing with "How Great Thou Art" begins 16 minutes and 23 seconds into the 20-minute video.)

Song leader Cliff Barrows had also been given a copy of the song, and after the 1954 London Harringay crusade, Barrows had Paul Mickelson arrange the music for use in the 1955 Toronto crusade in Maple Leaf Garden. However it was not until Billy Graham's 1957 Madison Square Garden crusade that the song became extremely popular. "We sang it about a hundred times at the insistence of the New York audiences," says Shea. "And from then on, it became a standard at most of the crusades."

That sounds like the end of the story. But history is full of ironies and strange twists. This surely is one: Although Boberg's "O Store Gud" was sung in Sweden since the 19th century, it never became really popular there until, as Swedish gospel singer Per-Erik Hallin notes, Elvis Presley recorded a Grammy-winning version of "How Great Thou Art." Then, thanks to Elvis, "O Store Gud" experienced a major revival and became a favorite in its native land.