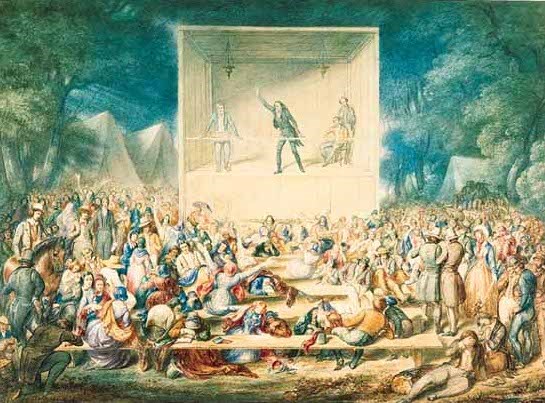 The emotional energy of Cane Ridge and other early frontier revivals arose from a strong emphasis on the Eucharist.

Many evangelicals - especially younger ones - are today re-engaging tradition. Other evangelicals worry about this re-engagement. They feel that to move toward a more liturgical form of worship or a more fixed, detailed style of theological "confession" is to give up the freer, more emotional worship style or more grass-roots, straightforward doctrinal and theological style won for us by such evangelical forefathers as the 18th century's John Wesley or the 19th century's Charles Finney.

I want to suggest that one way forward to healthier engagement with tradition for modern-day evangelicals is through a look at our own recent past. For American revivalism itself grew on unexpected foundations of liturgy and doctrinal confession.

As for liturgical and indeed sacramental worship: few evangelicals know that the drawing power and emotional energy of such early frontier revivals as the one at Cane Ridge, Kentucky in 1800 - which set the stage for a century of explosive evangelical growth - arose from a strong emphasis on the Eucharist. It's true! Those deeply emotional and highly demonstrative camp-meeting revivals were in fact multi-day "Eucharistic seasons," in the tradition of old-world Scotch-Irish Presbyterianism (See Leigh Eric Schmidt, Holy Fairs: Scotland and the Making of American Revivalism, 2nd ed. [Grand Rapids: Eerdmans, 1989]). A similar Eucharistic focus characterized the revivalistic "melting times" of exuberant worship and deep christocentric mysticism in the early American Methodist quarterly camp meetings (Lester Ruth, A Little Heaven Below [Nashville, Tenn.: Kingswood Books, 2000]).