Corruption in the church has existed as long as there have been people in it (consider, for example, both Peter’s denials and Judas’s greed), but widespread corruption and resistance to the truth were especially acute during Tyndale’s day.

For decades after the election of Rodrigo Borgia as Pope Alexander VI in 1492, the papacy was, in the words of Roman Catholic historian Father Bede Jarrett, “little else than a small Italian princedom ruled by some of the least reputable of the Renaissance princes.”

The great Roman Catholic historian, Dr. Ludwig Pastor, says of Alexander that “his life of unrestrained sensuality was in direct contradiction with the precepts of Him whose representative . . . he was.”

As with the head, so with the feet; most of the English priests leading masses, according to an archbishop of the time, were barely able to pronounce the Latin liturgies properly, much less comprehend them; leading clergymen throughout England were known for their illegitimate “wives” and children; and the business of indulgences was bringing huge sums into the Church’s coffers.

Tony Lane
Next Article
William Tyndale: A Gallery of Characters in Tyndale's Story 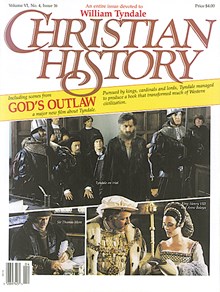