An emphasis in modern research is placed on attempting to identify the sources behind ancient writings—to prove how much of what an author says he or she borrowed from somebody else, and to add a footnote to each identified quote giving the reference. Supposedly, the more footnotes, the more learned were the author and the person being quoted by the author. A quotation from the Lord’s Prayer must have a reference to this or that Gospel, with chapter and verse—as if it could not have come out of the memory of the Christian writer; out of the Gospel through the reader of the Gospel. This approach, however, does not apply very well to the great genius of the 12th century, St. Bernard of Clairvaux.

Though it has been possible to recognize the ideas of previous writers in his writings, it is, however, rare that Bernard quotes somebody else’s formulations, that he says that he has read this or that somewhere else. Certainly it happened that as he was writing a particular book he was at the same time reading a work of St. Ambrose, St. Augustine, or someone else. It is obvious that he has surely read in Latin the biblical commentaries of Origen. But in his writings he simply depends on the whole tradition of the Church Fathers, especially on the readings he has heard during divine services.

The most recent discovery concerning this is that he was well acquainted with the philosophical and theological works of the fifth-century thinker, Boethius, although he does not mention him by name. He certainly also read the treatise of Cicero, On Friendship, before writing his own book, On the Love of God, and he drew some ideas from it, though he interpreted them in a new way. He quotes some classical Latin writers, especially poets; but they ...

John Van Engen
Next Article
The Search for a Holy Life 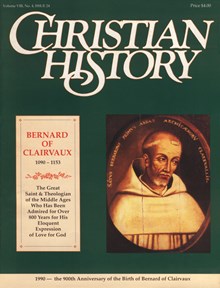 This article is from Issue 24 of the Christian History archive.