The story of early Christianity’s most famous—and most controversial—convert.
Bruce L. Shelley

The first Life of Constantine describes its subject as "resplendent with every virtue that godliness bestows." This panegyric came from the hand of Eusebius, bishop of Caesarea in Palestine, and perhaps Constantine's greatest admirer. It is the classic image that prevailed in Eastern Christianity for more than a thousand years.

Historians now debate whether "the first Christian emperor" was a Christian at all. Some think him an unprincipled power seeker who sought only to inflate his ego. What religion he had, many argue, was at best a blend of paganism and Christianity for purely political purposes.

Certainly, Constantine held to ideals we no longer share. He knew nothing of religion without politics or politics without religion. Yet he clearly believed he was a Christian, and he looked back to a battle at the Milvian Bridge, just outside the walls of Rome, as the decisive hour in his newly found faith.

Constantine’s early years lie mostly in history's shadows. We know only that he was born in Illyria, a region in the Balkans. His father, Constantius Chlorus, was already a Roman official on the rise. Helena, the daughter of an innkeeper and Constantius's wife, gave birth to Constantine around A.D. 280 in Naissus, just south of the Danube.

In 293 his father became caesar of the West (assistant to the Western augustus [emperor], Maximiam), and the young Constantine served in the court of Diocletian, the Eastern augustus.

The Most Widely Used Christian Symbol

The symbol Constantine made famous was formed by the overlapping of the Greek letters chi (X) and rho (P), an abbreviation for Christos already in use. Sometimes an alpha (a) and omega (w) were added, the first and ... 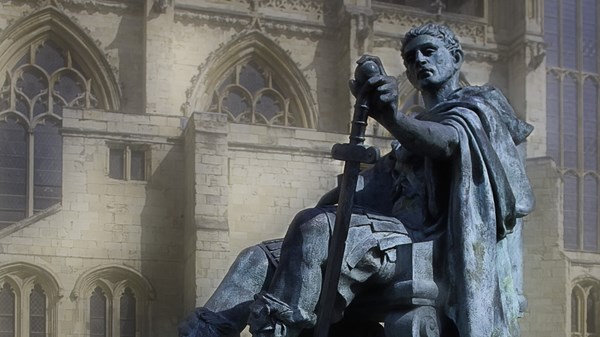 This article is from Issue 57 of the Christian History archive.