What Is a True Particular Visible Church? The Great Debate at Southwark Rejoined.
William Brackney

From the first appearance of the English Baptist congregations in the first two decades of the seventeenth century, Baptists were poor, persecuted, despised dissenters who were considered outside the mainstream of English church life. Early on, many of them fled the country, while others met in clandestine conventicles to worship, pray, and teach their beliefs. With intensified persecution in the 1620’s the major leaders and preachers were imprisoned and ridiculed. All of that began to change in the 1630’s. With more converts and even some members with wealth and social standing, Baptists grew bold and published their opinions more widely and engaged in public discussions, sometimes formal debates, to argue their doctrinal positions. Among all of the public activities perhaps none was more significant than the great debate in Southwark which was publicized then and since as a turning point for the struggling sect called Baptists.

The circumstance was this: two prominent English churchmen squared off against each other in what was to become one of the most celebrated religious debates of the seventeenth century. In a large hall (perhaps the famous Guild Hall) in Southwark, the two men presented their respective cases for the nature of the true church: passionately an Anglican denounced the practices of the sly opponent, and boldly the Baptist retorted the premises of logic and tradition. The occasion was a public disputation outside London: the protagonists were Daniel Featley, D.D., and William Kiffin; the date was October 17, 1642.

In an age already characterized by great social and political upheaval (not to speak of the changes wrought in the Church of England), the pot was yet boiling. Earlier in that year Oliver Cromwell ...

Next Article
A People Called Baptist 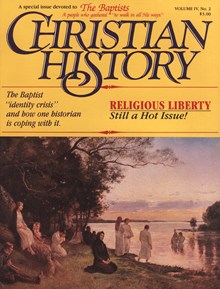