Windows on the life and work of J.R.R. Tolkien

Tolkien: "I am in fact a Hobbit"

In 1958, Tolkien wrote the following in a letter to a fan, Deborah Webster: "I am in fact a Hobbit (in all but size). I like gardens, trees and unmechanized farmlands; I smoke a pipe, and like good plain food (unrefrigerated), but detest French cooking; I like and even dare to wear in these dull days, ornamental waistcoats. I am fond of mushrooms (out of a field); have a very simple sense of humour (which even my appreciative critics find tiresome); I go to bed late and get up late (when possible). I do not travel much."

In 1936, publisher Stanley Unwin was deciding whether to publish The Hobbit. To help assess its popularity with children, he gave the manuscript to his youngest son, Rayner, for his opinion. This he often did, paying Rayner a standard fee of one shilling per report. Douglas Anderson tells how, with "the superiority of a ten-year-old," the boy wrote: "This book … is good and should appeal to all children between the ages of 5 and 9." Rayner Unwin (1925-2000) went on to become Tolkien's principal publisher.

Birth of a hobbit

The Hobbit was born one summer afternoon, likely in 1930. Tolkien, then a young professor, sat in his home office correcting examinations: "One of the candidates had mercifully left one of the pages with no writing on it, which is the best thing that can possibly happen to an examiner, and I wrote on it: 'In a hole in the ground there lived a hobbit.' Names always generate a story in my mind: eventually I thought I'd better find out what hobbits were like." (Seen here is Tolkien's original cover.)

His most exacting critic

Christopher Tolkien once interrupted his father as he read a chapter of The Hobbit to the Tolkien children in his study: "Last time, you said Bilbo's front door was blue, and you said Thorin had a golden tassel on his hood, but you've just said that Bilbo's front door was green, and the tassel on Thorin's hood was silver." Their father let out an exasperated exclamation—but quickly strode across the room to make a note.

Tolkien once received a letter from a man in London whose name was Sam Gamgee (the name of Frodo's loyal hobbit companion in The Lord of the Rings). In his responding letter, Tolkien admitted that what he really dreaded was getting a communication from S. Gollum. In fact, he had picked up the name Sam Gamgee in Sarehole, his rural childhood home. There, a local man named Samson Gamgee had become a household name for a surgical dressing he had invented.

Nine-tenths of the law?

"Possession" is a unifying theme in Tolkien's imagined world. The fallen Melkor wanted to have God's power of creation. The pathetic Gollum was twisted by his possessive love of his "Precious." No one epitomized this quality more than Smaug. The hobbit's dwarf companion Thorin could not hide his contempt: "Dragons … guard their plunder … and never enjoy a brass ring of it. Indeed they hardly know a good bit of work from a bad, though they usually have a good notion of the current market value; and they can't make a thing for themselves. …"

Tolkien once told a reporter that hobbits were English, implying the Shire was England. When asked what was east of Rhun and south of Harad, Tolkien continued, "Rhun is the Elvish word for east. Asia, China, Japan, and all the things which people in the West regard as far away. And south of Harad is Africa, the hot countries." The reporter probed, "That makes Middle-earth Europe, doesn't it?" Tolkien answered, "Yes, of course—Northwestern Europe … where my imagination comes from." (He later denied that he had said this.)

At the age of 19, Tolkien took a trip to Switzerland with family friends. There he saw mountains, up close, for the first time. As his children later told it, the rock-falls and snowy crevasses of these Alpine ranges lodged themselves in his imagination, to reappear in various guises in his stories.

His fears about a film version

Tolkien anticipated his books might inspire a film adaption, and he stated his concerns in a letter he wrote in June 1958. "The failure of poor films is often precisely in exaggeration," he explained, "and in the intrusion of unwarranted matter owing to not perceiving where the core of the original lies." He objected to editors who "cut the parts of the story upon which its characteristic and peculiar tone principally depends, showing a preference for fights," and said he would resent "perversion of the characters … even more than the spoiling of the plot and scenery."

Tolkien began creating the legends of Middle-earth on the front lines of World War I, where he served as an officer. He conceived The Silmarillion, he once said, in "grimy canteens, at lectures in cold fogs, in huts full of blasphemy and smut, or by candle light in bell-tents, even some down in dugouts under shell fire." Some of his early drafts of Middle-earth's legends are on the backs of official military documents.

They got along swimmingly

Tolkien's friendship with C. S. Lewis (see p. 36) was more than literary. "Tollers" joined "Jack" on at least one of the latter's famous days-long walking tours. On a number of occasions the two swam together in a large pond in front of The Kilns, Lewis's home from 1930. The two Oxford dons would paddle out to the pond's middle in a small boat, tie it to a snag, and dive from it into the water.

Tolkien always bristled at the charge that his writings were escapist musings bearing no relationship to real life or scientific reason. Fantasy writing, he said, "does not destroy or even insult Reason. … On the contrary. The keener and the clearer is the reason, the better fantasy will it make. If men were ever in a state in which they did not want to know or could not perceive truth (facts or evidence), then Fantasy would languish until they were cured."

C.S. LewisChildrenFilmJ.R.R. TolkienStories and StorytellingWar
Issue 78: J.R.R. Tolkien & Lord of the Rings, 2003
Next Article
J.R.R. Tolkien: From the Editor - He Gave Us Back Myth and with it, Truth
Chris Armstrong 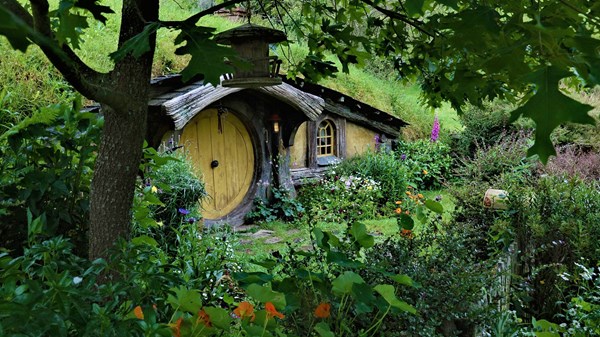