Chinese Catholics have endured devastating division in the past century.
Kim-Kwong Chan

In the early 1950s, the Chinese Catholic Church and the new Chinese government were on a collision course. The government regarded the Catholic Church as a form of Western interference in China. Catholics regarded the Communists as ideological archenemies out to destroy the church. This tension was tragically apparent in the fate of the Chinese Jesuit priest Bede Cheung. Fr. Cheung organized the Catholic Youth Movement and became the leading Catholic figure to resist the government's attempt to create a "patriotic" (pro-Communist) Catholic organization. He was arrested in 1951 and died in jail three months later. When his family came to retrieve his body for burial, eyewitnesses reported that his body was broken almost beyond recognition and showed signs of torture. His death became an icon of loyalty to the Catholic faith and gave many others the courage to confront the government—courage that was much needed in the violent decades that followed.

The government's suspicion of the Chinese Catholic Church as serving "Western" interests was not ungrounded. Catholicism had come to China in the 1300s and been revived by missionaries like Matteo Ricci in the late 1500s. In the early 1920s, the Chinese Catholic Church had more than a million believers and thousands of clergy. But in 1922, even though 40% of clergy were Chinese, all 41 bishops in China were foreigners. Pope Pius XI finally appointed two Chinese bishops and issued an encyclical affirming that church leadership should be transferred from missionaries to local leaders as soon as possible. In 1949, however, Chinese bishops were still in the minority. The tension between the new Communist regime and the Chinese Catholic Church was heightened by Pope Pius ...

Beijing, ChinaCatholicismHistoryInternationalMissionsRome
Issue 98: Christianity in China, 2008
Previous Article
As for Me and My House

Tony Lambert
Next Article
To Every Tribe 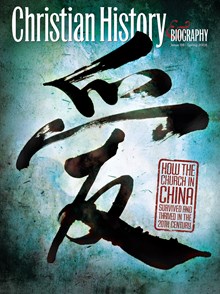