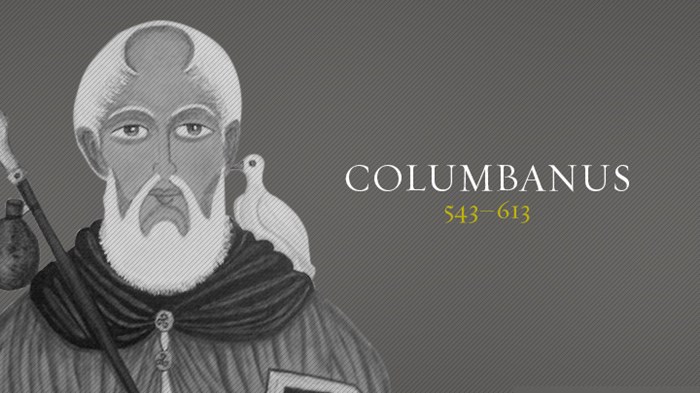 "Away, O youth, away! Flee from corruption, into which, as you know, many have fallen."— an abbess's well-heeded advice to Columbanus

The handsome and hot-headed Columbanus was one of Western Europe's most successful evangelists ever.

According to Columbanus's first biographer, writing a mere 28 years after his subject's death, "Columbanus's fine figure, his splendid color, and his noble manliness made him beloved by all." And therein lay the problem: "He aroused … the lust of lascivious maidens, especially of those whose fine figure and superficial beauty are wont to enkindle mad desires in the minds of wretched men."

As a young man, he was afraid he was on the brink of giving in to such vain "lusts of the world," so he sought the guidance of a local female hermit.

"Away, O youth, away!" she advised. "Flee from corruption, into which, as you know, many have fallen." Columbanus left, shaken, to pack his things to take up the monastic life. When he told his mother he was leaving, she became so distraught, she blocked the doorway. But Columbanus was undeterred, "leaping over both threshold and mother."

Asceticism with a smile

Columbanus continued his studies with Comgall of Bangor, whose monastery was famous for its asceticism. Not only did Columbanus thrive there, but he codified such asceticism into two rules for monasteries—one for individual monks, the other for communities. These rules could be extremely harsh: merely desiring to hit someone meant 40 days on bread and water. Actually hitting someone (and drawing blood) meant penance for three years. Even speaking ill of the rules meant exile from the community.

Yet Columbanus had another side, which some of his sermons and letters suggest. A letter to Pope Boniface IV is loaded with puns about the previous pope, Vigilus: "Be vigilant, I urge you, pope, be vigilant and again I say be vigilant, since perhaps he who was called Vigilant was not." In a letter to Gregory the Great, he made puns on Pope Leo's name: "A living dog is better than a dead Leo [lion]." Columbanus is also credited with a spirited "Boat Song" which was chanted by monks rowing up the "two-horned Rhine."

Even though he was witty, Columbanus was painfully serious about his faith. In his forties, he left Bangor to follow God's command, which was the same command given to Abraham: "Get thee out of thy country." With 12 companions, he left for Gaul, large parts of which had reverted to paganism (and the remaining Christians were likely nominal or Arian heretics). He founded three monasteries in rapid succession—Annegray, Luxeuil, and Fontaine—each one growing so quickly new ones had to be created.

Before he could build many more, he had a run-in with the polygamous king, Theuderic, and his mother, Brunhilde, and was thrown out of the country. It wasn't the only dispute in the hot-blooded monk's life. He feuded with popes, kings, bishops, and even his own followers. (After Gall, one of his most faithful disciples, became ill and could not travel, Columbanus forbade him to say Mass. The ban was not lifted until Columbanus was on his deathbed.)

Columbanus and his men roamed the continent, preaching in what would become France, Germany, and Switzerland. Finally, he traveled to northern Italy to convert the Lombards. There, in his seventies, he took part in the construction of Bobbio, the first Italo-Irish monastery, where he died November 23, 613. His legacy was extraordinary: he and his disciples founded at least 60—and possibly more than 100—monasteries throughout Europe.

Issue 60
How the Irish Were Saved
1998
Columbanus