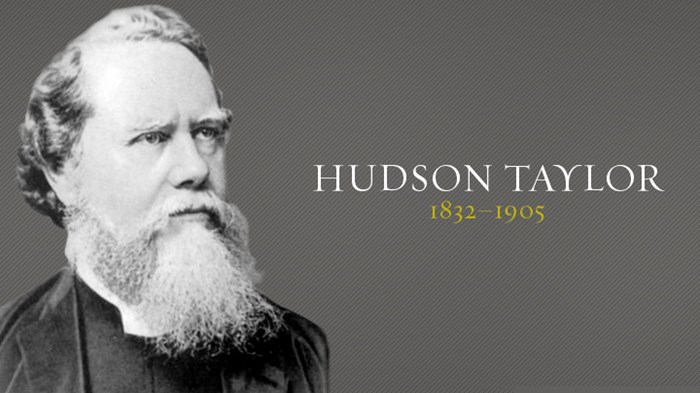 "China is not to be won for Christ by quiet, ease-loving men and women … The stamp of men and women we need is such as will put Jesus, China, [and] souls first and foremost in everything and at every time—even life itself must be secondary."

In September 1853, a little three-masted clipper slipped quietly out of Liverpool harbor with Hudson Taylor, a gaunt and wild-eyed 21-year-old missionary, aboard. He was headed for a country that was just coming into the Christian West's consciousness; only a few dozen missionaries were stationed there. By the time Taylor died a half-century later, however, China was viewed as the most fertile and challenging of mission fields as thousands volunteered annually to serve there.

Taylor was born to James and Amelia Taylor, a Methodist couple fascinated with the Far East who had prayed for their newborn, "Grant that he may work for you in China." Years later, a teenage Hudson experienced a spiritual birth during an intense time of prayer as he lay stretched, as he later put, "before Him with unspeakable awe and unspeakable joy." He spent the next years in frantic preparation, learning the rudiments of medicine, studying Mandarin, and immersing himself ever deeper into the Bible and prayer.

His ship arrived in Shanghai, one of five "treaty ports" China had opened to foreigners following its first Opium War with England. Almost immediately Taylor made a radical decision (as least for Protestant missionaries of the day): he decided to dress in Chinese clothes and grow a pigtail (as Chinese men did). His fellow Protestants were either incredulous or critical.

Taylor, for his part, was not happy with most missionaries he saw: he believed they were "worldly" and spent too much time with English businessmen and diplomats who needed their services as translators. Instead, Taylor wanted the Christian faith taken to the interior of China. So within months of arriving, and the native language still a challenge, Taylor, along with Joseph Edkins, set off for the interior, setting sail down the Huangpu River distributing Chinese Bibles and tracts.

When the Chinese Evangelization Society, which had sponsored Taylor, proved incapable of paying its missionaries in 1857, Taylor resigned and became an independent missionary; trusting God to meet his needs. The same year, he married Maria Dyer, daughter of missionaries stationed in China. He continued to pour himself into his work, and his small church in Ningpo grew to 21 members. But by 1861, he became seriously ill (probably with hepatitis) and was forced to return to England to recover.

In England, the restless Taylor continued translating the Bible into Chinese (a work he'd begun in China), studied to become a midwife, and recruited more missionaries. Troubled that people in England seemed to have little interest in China, he wrote China: Its Spiritual Need and Claims. In one passage, he scolded, "Can all the Christians in England sit still with folded arms while these multitudes [in China] are perishing—perishing for lack of knowledge—for lack of that knowledge which England possesses so richly?"

Taylor became convinced that a special organization was needed to evangelize the interior of China. He made plans to recruit 24 missionaries: two for each of the 11 unreached inland provinces and two for Mongolia. It was a visionary plan that would have left veteran recruiters breathless: it would increase the number of China missionaries by 25 percent.

Taylor himself was wracked with doubt: he worried about sending men and women unprotected into the interior; at the same time, he despaired for the millions of Chinese who were dying without the hope of the gospel. In 1865 he wrote in his diary, "For two or three months, intense conflict … Thought I should lose my mind." A friend invited him to the south coast of England, to Brighton, for a break. And it was there, while walking along the beach, that Taylor's gloom lifted:

"There the Lord conquered my unbelief, and I surrendered myself to God for this service. I told him that all responsibility as to the issues and consequences must rest with him; that as his servant it was mine to obey and to follow him."

His new mission, which he called the China Inland Mission (CIM), had a number of distinctive features, including this: its missionaries would have no guaranteed salaries nor could they appeal for funds; they would simply trust God to supply their needs; furthermore, its missionaries would adopt Chinese dress and then press the gospel into the China interior.

Within a year of his breakthrough, Taylor, his wife and four children, and 16 young missionaries sailed from London to join five others already in China working under Taylor's direction.

Strains in the organization

Taylor continued to make enormous demands upon himself (he saw more than 200 patients daily when he first returned) and on CIM missionaries, some of whom balked. Lewis Nicol, who accused Taylor of tyranny, had to be dismissed. Some CIM missionaries, in the wake of this and other controversies, left to join other missions, but in 1876, with 52 missionaries, CIM constituted one-fifth of the missionary force in China.

Because there continued to be so many Chinese to reach, Taylor instituted another radical policy: he sent unmarried women into the interior, a move criticized by many veterans. But Taylor's boldness knew no bounds. In 1881, he asked God for another 70 missionaries by the close of 1884: he got 76. In late 1886, Taylor prayed for another 100 within a year: by November 1887, he announced 102 candidates had been accepted for service.

His leadership style and high ideals created enormous strains between the London and China councils of the CIM. London thought Taylor autocratic; Taylor said he was only doing what he thought was best for the work, and then demanded more commitment from others: "China is not to be won for Christ by quiet, ease-loving men and women," he wrote. "The stamp of men and women we need is such as will put Jesus, China, [and] souls first and foremost in everything and at every time—even life itself must be secondary."

Taylor's grueling work pace, both in China and abroad (to England, the United States, and Canada on speaking engagements and to recruit), was carried on despite Taylor's poor health and bouts with depression. In 1900 it became too much, and he had complete physical and mental breakdown. The personal cost of Taylor's vision was high on his family as well: his wife Maria died at age 33, and four of eight of their children died before they reached the age of 10. (Taylor eventually married Jennie Faulding, a CIM missionary.)

Between his work ethic and his absolute trust in God (despite never soliciting funds, his CIM grew and prospered), he inspired thousands to forsake the comforts of the West to bring the Christian message to the vast and unknown interior of China. Though mission work in China was interrupted by the communist takeover in 1949, the CIM continues to this day under the name Overseas Missionary Fellowship (International).