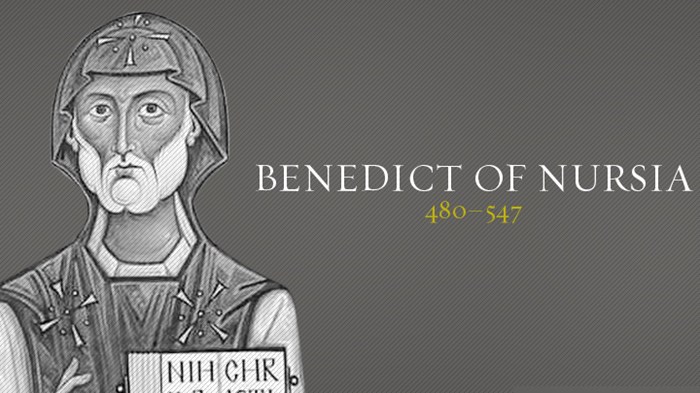 "The good of all concerned, however, may prompt us to a little strictness in order to amend faults and to safeguard love."

The first monks who tried to live under Benedict's direction hated his regimen, so much so they plotted to kill their abbot. They put poison in a glass of wine and offered it to Benedict. Before he took it, he blessed it, as was the custom. According to the story told by Pope Gregory I (Benedict's biographer), when Benedict made the sign of the cross over the wine glass, it shattered, and the wine spilled to the floor.

Benedict, Gregory wrote, "perceived that the glass had in it the drink of death," called his monks together, said he forgave them, reminded them that he doubted from the beginning whether he was a suitable abbot for them, and concluded, "Go your ways, and seek some other father suitable to your own conditions, for I intend not now to stay any longer amongst you."

We don't know if Benedict was overly strict or if his first monks were simply obstinate. But years later, when Benedict wrote a rule of life for another group of monks, it turned out to be a model of monastic moderation and one reason monasticism blossomed in the West.

Despite the fact that we have a full biography by Gregory, we know very little about Benedict. The biography mostly tells of signs and wonders performed by Benedict (miraculously mending a broken sieve, calling forth water from a rock, raising the dead, and so on). We can piece together, though, a sketch of his life.

Benedict was born as the Roman Empire was disintegrating, and during his youth, the Italian peninsula was the scene of constant war between barbarian tribes. The young Benedict moved from his birthplace (Nursia in Umbria) to Rome but soon abandoned the "eternal city" when he became disgusted with the paganism and immorality he saw there. He retired to a cave at Subiaco, some 30 miles east of Rome, where he lived as a hermit and endured severe privations.

He sought as little contact as possible with others. An admiring monk delivered Benedict his food from above the cave, dangling it by a rope with a bell attached to get Benedict's attention.

He also disciplined his flesh. According to Gregory, he was once nearly overcome with lust as he remembered a certain woman. Benedict stripped himself and ran naked into thorn bushes so that "all his flesh was pitifully torn: and so by the wounds of his body, he cured the wounds of his soul, in that he turned pleasure into pain, and by the outward burning of extreme smart, quenched that fire."

As his reputation for holiness—and perhaps performing miracles—spread, more and more monks tried to attach themselves to him. He reluctantly agreed to become abbot of a small monastery, but after the attempted murder, he moved back into solitude.

Again monks sought him out, and before long he had established 12 monasteries with 12 monks in each. But the envy of local clergy (one of whom, according to Gregory, tried to put the poison in a loaf of bread) so disturbed Benedict that he moved again, and with some disciples established another monastery, this time on the mountain above Cassino, about 80 miles south of Rome.

His fame continued to spread (even the king of the Goths, Totila, came to see him) as his reforms continued. Gregory says that when Benedict came across a local chapel devoted to the old Roman god Apollo, he "beat in pieces the idol, overthrew the altar, set fire to the woods," and made it into a Christian sanctuary.

Taking ideas from a number of earlier monastic writings (and likely from his own experience), Benedict wrote a Rule for his monks, one that is today praised for its balanced approach to monastic life. Besides the vows of poverty, chastity, and obedience, it stressed communal living, physical labor, common meals, and the avoidance of unnecessary conversation.

At the same time, Benedict made allowances for his monks—for differences of age, capabilities, dispositions, needs, and spiritual stature. There is a frank allowance for weaknesses and failure, as well as compassion for the physically weak. "In drawing up these regulations," he said, "we hope to set down nothing harsh, nothing burdensome."

But he was no libertine: "The good of all concerned, however, may prompt us to a little strictness in order to amend faults and to safeguard love."

It is this combination of compassion and discipline that made the Rule a model for many later monastic orders besides the Benedictine, and one reason why monasticism became such a viable life for so many over the next centuries, during which the institution literally shaped the future of Europe.

When Benedict died, he was buried next to his sister, Scholastica, traditionally regarded his twin and also a follower of the monastic way.