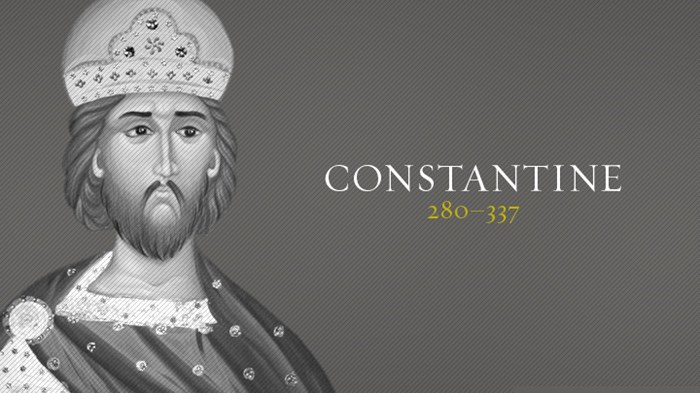 "I have experienced this in others and in myself, for I walked not in the way of righteousness. … But the Almighty God, who sits in the court of heaven, granted what I did not deserve."

The first Life of Constantine describes its subject as "resplendent with every virtue that godliness bestows." This praise-filled biography came from the hand of Eusebius, bishop of Caesarea in Palestine, and perhaps Constantine's greatest admirer. It is the classic image that prevailed in Eastern Christianity for more than a thousand years.

Historians now debate whether "the first Christian emperor" was a Christian at all. Some think him an unprincipled power seeker. What religion he had, many argue, was at best a blend of paganism and Christianity for purely political purposes.

Certainly, Constantine held to ideals we no longer share. He knew nothing of religion without politics or politics without religion. Yet he clearly believed he was a Christian, and he looked back to a battle at the Milvian Bridge, just outside the walls of Rome, as the decisive hour in his newly found faith.

Of Constantine's early years, we know only that he was born in Illyria, a region in the Balkans. His father, Constantius Chlorus, was already a Roman official on the rise. Helena, the daughter of an innkeeper and Constantius's wife, gave birth to Constantine around A.D. 280 in Naissus, just south of the Danube. By the time Constantine was 31, he was in line to become emperor of the western empire—and more.

In the spring of 311, with 40,000 soldiers behind him, Constantine rode toward Rome to confront an enemy whose numbers were four times his own. Maxentius, vying for supremacy in the West, waited in Rome with his Italian troops and the elite Praetorian Guard, confident no one could successfully invade the city. But Constantine's army was already overwhelming his foes in Italy as he marched toward the capital.

Maxentius turned to pagan oracles, finding a prophecy that the "enemy of the Romans" would perish. But Constantine was still miles away. So, bolstered by the prophecy, Maxentius left the city to meet his foe.

Meanwhile, Constantine saw a vision in the afternoon sky: a bright cross with the words By this sign conquer. As the story goes, Christ himself told Constantine in a dream to take the cross into battle as his standard.

Though accounts vary, Constantine apparently believed the omen to be a word from God. When he awoke early the next morning, the young commander obeyed the message and ordered his soldiers to mark their shields with the now famous Chi-Rho.

Maxentius's troops fled in disarray toward the surging Tiber. The would-be emperor attempted to escape over the wooden bridge erected to span the stream, but his own army-turned-mob, pressing through the narrow passage, forced him into the river, where he drowned by the weight of his armor.

Constantine entered Rome the undisputed ruler of the West, the first Roman emperor with a cross in his diadem.

Once supreme in the West, Constantine met Licinius, the ruler of the Balkan provinces, and issued the famous Edict of Milan that gave Christians freedom of worship and directed the governors to restore all the property seized during the severe Diocletian persecution.

Eusebius in his Church History recorded the Christian jubilation: "The whole human race was freed from the oppression of the tyrants. We especially, who had fixed our hopes upon the Christ of God, had gladness unspeakable."

Constantine's faith was still imprecise, but few questioned its authenticity. In 314 Constantine sent a message to the assembled bishops at the Council of Arles. He wrote about how God does not allow people "to wander in the shadows" but reveals to them salvation: "I have experienced this in others and in myself, for I walked not in the way of righteousness. … But the Almighty God, who sits in the court of heaven, granted what I did not deserve."

For a decade, though, he wavered. For example, on the Arch of Constantine, which celebrates his Milvian Bridge victory, pagan sacrifices usually depicted on Roman monuments are absent. Then again, there are still no Christian symbols, and Victory and the Sun God are honored.

He had no desire to impose his newfound faith as a state religion. "The struggle for deathlessness," he said, "must be free." He seemed to begin where his father left off: more or less a monotheist opposed to idols, and more or less friendly toward Christians. Only through the years did his Christian convictions grow.

In 323 Constantine triumphed over Licinius and became the sole ruler of the Roman world. The victory enabled Constantine to move the seat of government permanently to the East, to the ancient Greek city of Byzantium (now Istanbul). He enlarged and enriched the city at enormous expense and built magnificent churches throughout the East. The new capital was dedicated as New Rome, but everyone soon called the city Constantinople.

Christians were more populous and vocal in the East than they were in Rome, so during the last 14 years of his reign, "Bullneck" could openly proclaim himself a Christian. He proceeded to create the conditions we call "state-church" and bequeathed the ideal to Christians for over a thousand years.

In 325 the Arian controversy threatened to split the newly united empire. To settle the matter, Constantine called together a council of the bishops at Nicea, a city near the capital. He ran the meeting himself.

"You are bishops whose jurisdiction is within the church," he told them. "But I also am a bishop, ordained by God to oversee those outside the church."

Presiding at the council, Constantine was magnificent: arranging elaborate ceremony, dramatic entrances and processions, and splendid services. He was also a gifted mediator, now bringing his skill in public relations to the management of church affairs.

Unfortunately he could not follow abstract arguments or subtle issues and often found himself at a great disadvantage at these councils.

Constantine waited until death drew near to be baptized as a Christian. His decision was not unusual in a day when many Christians believed one could not be forgiven after baptism. Since the sins of worldly men, especially those with public duties, were considered incompatible with Christian virtue, some church leaders delayed baptizing such men until just before death.

He gave his sons an orthodox Christian education, and his relationship with his mother was generally happy, but he continued to act as a typical Roman emperor. He ordered the execution of his eldest son, his second wife, and his favorite sister's husband. No one seems to be able to explain fully his reasons.

While many of his actions cannot be defended, he did bid farewell to the old Roman gods and make the cross an emblem of Victory in the world.