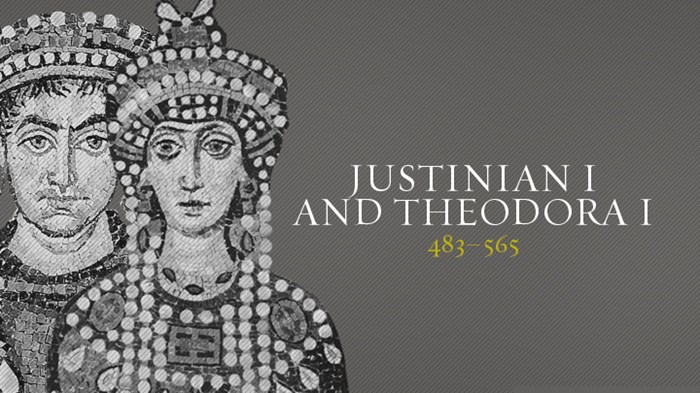 There are two great gifts which God, in his love for man, has granted from on high: the priesthood and the imperial dignity"
—Justinian I

What many previous emperors before had failed to do, "we have decided now to grant to the world, with the help of Almighty God," announced the ambitious Justinian I with his wife, Theodora. Not content to plaster over an empire cracking and peeling with age, he intended to do nothing less than completely remake the Roman Empire—legally, militarily, architecturally—and unite it once more into a glorious kingdom. And in large measure he succeeded.

Justinian was born Flavius Peterus Sabbatius, the son of a farmer whose childless uncle was on his way to becoming Emperor Justin I. Justinian was called to the capital in his teens and given the best education possible. He became a member of Justin's inner circle, took a variation of his name, and became Justin's most influential adviser.

Justinian was meticulous, patient, and by nature solitary. He could also persevere, sustaining long-range plans in spite of serious reverses—though he became unnerved when in danger. He needed so little rest, he was known by his subjects as "the emperor who never sleeps."

When Justinian was crowned in 527, he named as co-regent his young wife Theodora. She was 15 years his junior and his opposite in nearly every way. She was social, witty, supremely self-confident, and never lost her head in a crisis. He adored her, and she was his most important adviser.

She had come to the crown from the gutter. Her parents were performers, the lowest strata of free society. Her father died when she was a child, and she took to the stage to earn a living. Most actresses were also prostitutes, and whispers to that affect followed her all her life.

When she became a Christian, she gave up her former life for spinning wool. In 522, she met Justinian, who was so enamored with her, he changed the law so that actresses could marry into high society. The following year, he married her.

Justin longed to reunite the empire partly because of his philosophy of church and state. "There are two great gifts which God, in his love for man, has granted from on high: the priesthood and the imperial dignity," he wrote. "The first serves divine things, while the latter directs and administers human affairs; both, however, proceed from the same origin and adorn the life of mankind."

If both church and state perform their duties well, a "general harmony will result." It was in pursuit of this general harmony that Justinian enlisted his efforts.

Justinian sent his armies to take Africa back from the weakened Vandals in 533. He concluded a peace treaty with his Persian rivals to the east and conquered one Arabic or Slavic kingdom after another. In 535 he invaded Italy and fought the Goths for 25 years until they had been ejected and the peninsula virtually destroyed. By the end of his reign, Justinian had very nearly restored the boundaries of Roman Empire at its height—but at the cost of an empty treasury.

In 528 Justinian established three imperial law schools and appointed a commission to reorganize the legal system. He created what has become known as the Code of Justinian—the Corpus Juris Civilis—part of the authoritative statement of Roman law that was gradually accepted throughout Western Europe.

The Code contained much that was unapologetically Christian. "It is right that those who do not worship God correctly should be deprived of worldly advantage too," said Justinian, so the laws made life difficult for heretics and unbelievers. He also closed the famous university at Athens, a center of pagan thought, and prosecuted the heretical Montanists.

But to the faithful he was benevolent. He made it easier to free Christian slaves, gave more legal rights to women and children, made divorce harder, and reduced the number of capital crimes.

Still, Justinian sought to unite his empire in religious matters. The most bothersome division for Justinian was between the orthodox Christian believers and the Monophysites. Orthodox believers, who honored the conclusions of the Council of Chalcedon, said Jesus had two natures in one person. Monophysites said Jesus had one nature, his divinity having swallowed up his humanity like a "drop of wine in the ocean." Justinian believed the dispute was a misunderstanding and wanted to reconcile the parties.

But more than theology was at stake. The Monophysites, centered in Egypt, controlled the grain exporting regions of the empire. And then there was Justinian's beloved Theodora: a Monophysite.

In 544 Justinian published a tract, known as "The Three Chapters," in which he tried to find ground for compromise, but this satisfied nobody. Even after forcing his views through a church council, the Second Council of Constantinople (553), the issues were left unresolved.

Throughout his 38-year reign, Justinian erected magnificent buildings around the empire—25 basilicas in Constantinople alone, including the Sancta Sophia ("Holy Wisdom"), the crowning jewel of Byzantine architecture.

When Justinian died, the Mediterranean was once again an imperial lake. But the empire was never really united and began dismantling within two years. Nonetheless, the reign of Justinian and Theodora ranks as the greatest in Byzantine history.