One of my favorite annual duties in my role with the teen magazine Ignite Your Faith (CT Movies' sister site for teens) is sifting through the votes for our most redeeming movie awards, The Golden Nachos. While all but one of their choices also appeared in CT Movie's top ten list of the most redeeming movies this year, the order is pretty different.

So what do I dig about the Golden Nachos? The readers' explanations of WHY they vote the way they do. Say what you will about the average teen's movie-going tendencies or tastes, but our IYF readers aren't just mindlessly watching movies–they're processing, discerning, and evaluating them.

For instance, one teen explains that she used her one pick for the year's most redeeming film on WALL*E because it "demonstrated the very definition of agape love." Another chose The Dark Knight because it "showed a perfect illustration of Satan. The Joker just attacks because he hates goodness."

For as much as Hollywood churns out thoughtless sex comedies ... 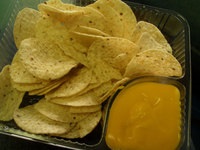