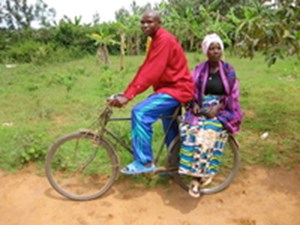 I spent almost two weeks in Rwanda earlier this year with my good friends Troy and Sara Groves and a team from Food for the Hungry. While there, I met a man named Marc who in 1994 had killed 15 people during that nation's genocide. I also met a woman, Felicita, who lost many family members in the killings, including her father – all of them at Marc's hands, which were wielding a machete.

When I met Marc & Felicita, they shared beers and laughter over lunch while telling me their amazing story of how hatred and murder had transformed into forgiveness and reconciliation – and how they're now sharing their story with others throughout Rwanda, riding a bike together (see picture) from village to village with their incredible true tale.

You'll be able to see their story soon on a new documentary, Wounded Healers, which premieres Dec. 3 at the Seattle International Film Festival. It's a production of Rwanda Partners, which was very helpful in assisting me in my reporting in Rwanda, and introducing me to Marc and Felicita and their incredible story.

I can't wait to see this documentary. Watch the trailer here. And while you're waiting for this film to arrive, be sure to check out another great documentary about reconciliation in Rwanda, As We Forgive.