I have never before attended a congress or convention that put out a press release on its problems with internet access. Cape Town 2010 told us last night–whether proudly or despondently was not quite clear–that their internet use had overwhelmed the system at Cape Town's sparkling convention center. 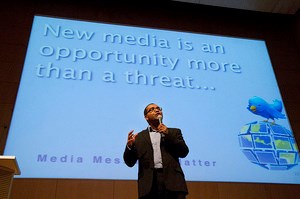 Not even the recent World Cup had used nearly so much capacity. Even today, the third day of the conference, wi-fi access was very spotty. Conducting interviews with Cape Town 2010 leaders this morning, I was regularly interrupted by technicians apparently trying to upgrade capacity. If they have been successful, you couldn't prove it by me.

Being no IT expert I will not guess whether the beautiful city of Cape Town or its gleaming convention center are substandard in these matters. I am sure of this, however: evangelicals are connected.

IT issues on such a scale would have been unthinkable at Lausanne in 1974 (the first conference) or at Manila in 1989 (the second). With virtually every nation in the world represented here, it appears that few evangelical leaders fail to possess a cell phone and a laptop. They are connected to the world.

More to the point, they can write and talk to each other globally–and they do. And they will.