David Wilkerson, author of The Cross and the Switchblade and founder of World Challenge Ministries, died in a car crash today, Charisma and CBN are reporting. CBN reports that Wilkerson, 79, was driving and was pronounced dead at the scene.

Wilkerson was driving east on U.S. 175 in Texas Wednesday afternoon, and moved into the opposite lane where a tractor trailer was driving westbound. The truck driver saw the car and tried to move out of the way, but still collided with the pastor's car head on, according to Public Safety Trooper Eric Long.

It's unclear what caused Wilkerson to veer into the other lane. His wife Gwen was also involved in the crash and rushed to the hospital, along with the truck driver.

The church that he founded, Times Square Church in New York City, has more than 8,000 members.

In 2009, Wilkerson posted a message warning of riots, fires, and economic collapse in New York City. CT wrote at the time about why Wilkerson's message received so much attention. 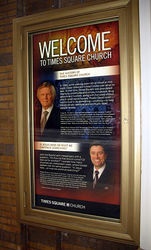