Libertarians, contrarians, and college students appear to love Ron Paul. Pragmatic-minded Republican voters tend to support so-called establishment candidate Mitt Romney. But social conservatives have yet to rally around a single candidate. In Iowa, however, Rick Santorum is gaining both endorsements and support in the polls just as his rivals' campaigns fade. 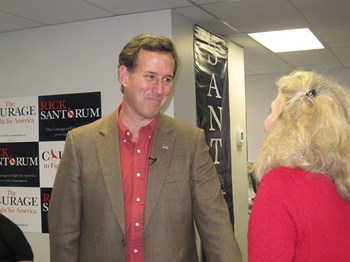 In a campaign season known for the rapid rise and fall of frontrunners, Santorum may prove to be the proverbial tortoise who is rewarded for a slow and steady race. With more time than money, Santorum has spent years crisscrossing the state, meeting with small groups of voters. He has spent little time or money outside the Hawkeye state with the goal to win the ground war in Iowa and use the victory to propel him into the lead nationally.

In a year when other candidates focused on jobs and the economy, the Santorum campaign focused on family values and social issues. He wrote the book on the importance of families in public policy. His campaign touts his personal life as a father of seven home-schooled children. He worked with Iowans to campaign successfully to remove Iowa State Supreme Court justices who overturned the state's marriage law that prohibited same-sex marriage. He put abortion at the front and center of his campaign. On the check-list of issues social conservatives care about, Santorum scores high.

Conservative leaders have given Santorum the thumbs-up. Glenn Beck compared him to George Washington. The Iowa Family Leader, an effective state organization, declined to endorse any candidates in the race, but its president, Bob Vander Plaats, endorsed Santorum, saying that the Pennsylvanian was at home among Iowan social conservatives.

Until recently, Santorum has faced two (related) challenges. The first was viability. With little money and national name recognition, it was unlikely he could win the nomination, let alone the general election. Second, there were other social conservatives who were seen as having a greater chance of electoral success.

Fortunately for Santorum, his rivals have suffered from self-inflicted wounds. In June, Michele Bachmann rose to the top of the polls. Since then, she has dropped in the polls as her campaign organization has fallen apart. Most recently, her Iowa campaign chair switched allegiances this week when Kent Sorenson endorsed Ron Paul. This summer, her campaign manager Ed Rollins and deputy manager David Polyansky stepped down and in October, other top aides walked away from Bachmann.

Rick Perry, Santorum's other major rival, is also gasping and grasping after his own fall from the frontrunner status. He is explicitly courting religious voters in his campaign ads and has changed his position on abortion. Previously, Perry had said exceptions should be made for cases of rape or incest. On Tuesday, however, Perry said he was having a "transformation" on the issue. With a week before the caucuses, Perry says he now opposes all abortions except in the cases of the life of the mother, matching Santorum's view.

Perry's campaign is also taking aim at Santorum. On Thursday, the Perry campaign released a new radio ad that hits Santorum for his record on federal earmarks and other budget issues while he served in Congress. The minute-long ad said, "Santorum grabbed for a billion in earmarks until voters kicked him out of office in a landslide."

If Santorum wins, he will face greater scrutiny. One area likely to raise eyebrows is Santorum's views of contraception. In October, Santorum, said that he would talk about the "dangers of contraception," that contraception is a "license" to do things not intended for sex (see 17:55 in this video).

Santorum also raised controversy this spring when he disagreed with John McCain over the efficacy of torture in interrogations. Santorum said McCain did not understand how "enhanced interrogation" worked. The comment was quickly rebuffed by McCain's staff. CT interviewed Santorum on several issues last spring.