The Pentagon has issued a memo allowing military chaplains to perform same-sex marriages if it is allowed by the law and the chaplain's beliefs.

Last week, the military ended its "don't ask, don't tell" policy on gays and lesbians serving openly in the military, raising questions about the ability military chaplains will have to express their views on homosexuality. 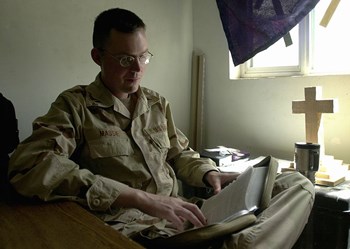 "A military chaplain may participate in or officiate any private ceremony, whether on or off a military installation, provided that the ceremony is not prohibited by applicable state and local law," a memo released Friday says. "Further a chaplain is not required to participate in or officiate a private ceremony if doing so would be in variance with the tenets of his or her religion."

In May, the Navy initially said it would same-sex marriages and then reversed its decision on marriages on military bases.

Under Secretary of Defense Clifford Stanley said in the new memo that "a military chaplain's participation in a private ceremony does not constitute an endorsement of the ceremony by [the Department of Defense]."

The Pentagon says Defense Department property may be used for private functions as long as it is in line with the Federal Defense of Marriage Act and local laws. Five states recognize same-sex marriage: Connecticut, Iowa, Massachusetts, New Hampshire, New York, and Vermont.