"Please know that I never would tell anybody to leave their sick spouse," broadcaster says on 700 Club. I'm not giving a theological [defense]; I'm not John Calvin giving the Institutes of the Christian Religion."
Sarah Pulliam Bailey|September 28, 2011 10:17 PM

Pat Robertson said this week that comments he made on divorce and Alzheimer's were "misinterpreted."

"I want to say I envy the Catholic priest, because when they have someone in confession it's all kept secret," Robertson said and laughed. "When I have somebody asking me for advice, it spreads worldwide and it's misunderstood."

Robertson recapped the story, saying, "Basically I'm saying, adultery is not a good thing, and you might as well straighten your life out, and the only way to do it is to kind of get your affair with your wife in order." 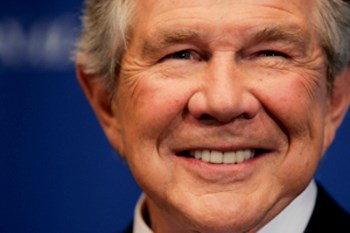 Robertson suggested earlier this month that it would be understandable for someone to divorce a spouse who has Alzheimer's. A viewer asked Robertson how to address a friend who was dating another woman while his wife has Alzheimer's. "I know it sounds cruel, but if he's going to do something he should divorce her and start all over again," he said at the time.

He said Monday on the 700 Club that he wasn't giving "general teaching for the world." Robertson said he has been married for 57 years, indicating his support for his wife who has had breast cancer and her support when he had prostate cancer and heart surgery.

"I mean we expect that. We love each other," he said. And of course you're with your wife or husband when they're sick. Good grief, yes. That's the way we should do it. And we expect it."

Robertson also referred to the person asking the question as going "on and on and on." "I was not giving advice to the whole world, and nor was I counseling anybody to be unscriptural and leave their spouse," Robertson said.

He ended focusing on the specific case.

"And remember, they come to me asking for specific advice and I give them specific advice about their condition, not for the world. I'm not giving a theological [defense]; I'm not John Calvin giving the Institutes of the Christian Religion."