China’s church raids drew headlines, but 26 countries—including India—treated Christians worse in 2018.
Kate Shellnutt|January 16, 2019 10:30 AM
Image: Daniel Berehulak / Getty
A damaged painting hangs on a the wall of a church at a relief camp in the village of Mondesore near Raikia, India
Asia Rising: The Top 50 Countries Where It’s Hardest to Follow ...

Christian persecution has worsened in the most populous countries in the world, China and India, putting millions more believers at risk for their faith.

The two Asian nations moved up on Open Doors’s annual ranking of the 50 countries where it’s hardest to be a Christian. India entered the World Watch List’s top 10 for the first time, due to a growing Hindu nationalist threat stirring anti-Christian sentiments. Meanwhile China, where the Communist government continues closing major congregations and detaining Christian leaders, climbed from No. 43rd to No. 27 on the list.

Researchers calculate that 1 in 3 Asian Christians now experience high levels of persecution for their faith.

Year after year, Open Doors has reported on the decline of religious freedom for Christians worldwide—measuring persecution through government restrictions, social pressures, and outright violence.

“In the north and Middle Belt of Nigeria … at least 3,700 Christians were killed for their faith—almost double the number of a year ago (an estimated 2,000)—with villages completely abandoned by Christians forced to flee, as their armed attackers then move in to settle, with impunity,” wrote World Watch Monitor in its analysis of the list. The news service noted that “of the 4,136 deaths for Christian faith that the List reports, Nigeria alone accounts for about 90% (3,731).”

Overall, 1 in 6 African Christians now experience high levels of persecution for their faith, according to Open Doors researchers.

Of the 150 countries monitored by Open Doors, 73 now exhibit high to extreme levels of persecution; last year, only 58 countries showed the same. “[In 2019], 11 countries score highly enough to fit into the ‘extreme’ category for the level of persecution of Christians,” noted World Watch Monitor. “It was the same last year, but five years ago, only North Korea was in that category.”

The rise corresponds with the Pew Research Center’s 2018 report on the global rise in religious antagonism overall, which found that 83 percent of the population lives in places with “high” or “very high” religious restrictions, since some of the most restrictive countries—again, China and India—are also the world’s largest. The worsening restrictions represent the biggest surge in religious hostility in over a decade, according to Pew.

The World Watch List’s No. 1 spot has gone to the same place for 18 years running: North Korea, where Christianity is banned. Besides North Korea and India at No. 10, all others at the top of the rankings are majority-Muslim countries with a Christian minority: Afghanistan, Somalia, Libya, Pakistan, Sudan, Eritrea, Yemen, and Iran.

Even though China doesn’t yet rank among the worst offenders on Open Doors’s list, the swift actions by the government to reshape and “Sinicize” Christianity represent a mounting threat to the world’s biggest persecuted church.

“The distressing impact of billions of people living in an environment in which the government oppresses freedom of religion is unraveling day by day as millions of Christians are being attacked, imprisoned, or killed.” 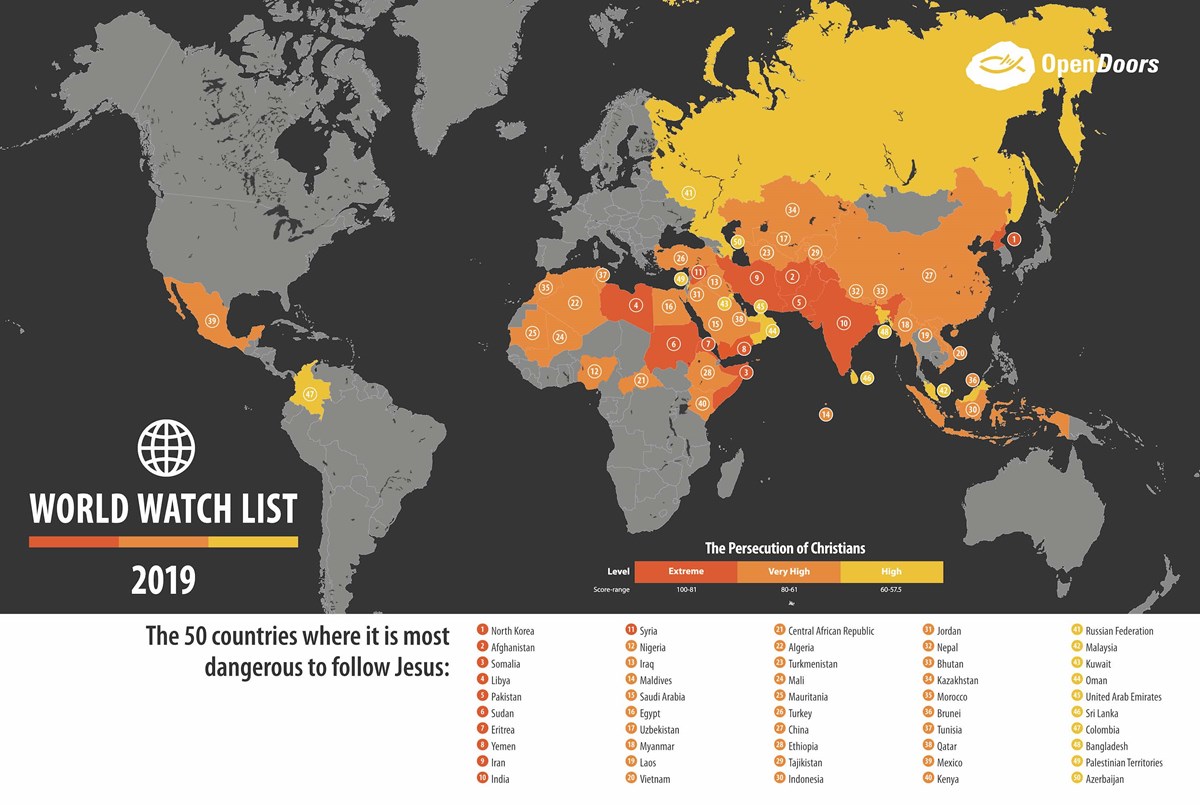 India’s place on the World Watch List has risen steadily since it first broke the top 20 in 2014, the same year current Prime Minister Narendra Modi took office. Now at No. 10, the predominantly Hindu nation (about 80% of the population) scored the highest for persecution in national life and in violence against Christians.

“It was hoped that the persecution of Christians by Hindu radicals would slow down a bit … but these hopes were in vain: Hindu radicals have continued their attacks and even increased them,” according to Open Doors, which cited anti-conversion laws passed in eight states and regulations targeting Christian-led institutions.

India and its neighbor Pakistan, which ranked No. 5 on the overall list, have the highest levels of violence among the top 10. (After Pakistan, Christians in Nigeria and the Central African Republic experienced the most violence last year.)

China scored its worst in the category for church life, with Open Doors noting that “the management of religious affairs lies with the Communist Party now, not just with government, and Christians are feeling this strongly … in both state-approved and non-registered churches.”

“I accept and respect the fact that this Communist regime has been allowed by God to rule temporarily. … At the same time, I believe that this Communist regime’s persecution against the church is a greatly wicked, unlawful action,” wrote pastor Wang Yi, who was arrested late last year after officials raided Early Rain Covenant Church in Chengdu, in a viral letter on his faithful disobedience.

Around the same time as Yi’s detention, Andrew Walker, senior fellow in Christian ethics for the Ethics and Religious Liberty Commission of the Southern Baptist Convention, traveled to the United Nations office at Geneva to advocate for victims of religious persecution in China as well as North Korea.

“When it comes to a notorious human rights offender like China, a country always interested in consolidating power, it's possible to see the rise of religious persecution as a part of a broader, growing anti-democratic impulse to crackdown on the growth of Christianity,” said Walker in a statement to CT.

“When consolidating power and erasing dissent is the name of the game for a political regime, you can always count on religion in general, and Christianity in particular, to be a victim.”

According to Open Doors, Christianity’s “victim” status among the most severe violators of religious freedom isn’t improving. Each country in the top 10 either scored higher for persecution or held steady over the past year.

The annual World Watch List and other measures of religious freedom—even when they continually reveal negative trends—can serve as a tool for Christians to process international headlines and better understand how government forces abroad affect the global church, according to K. A. Ellis, an expert in Christian persecution and the new director of the Center for the Study of the Bible & Ethnicity at Reformed Theological Seminary.

“I’ve also seen such lists foster a burden to support church planters in a hostile region, either on one person or a congregation’s heart, expanding our understanding of how the local and global are inseparable,” she said.

Judd Birdsall, managing director of the Cambridge Institute on Religion and International Studies, recently cautioned Western Christians against pitfalls of combating persecution, including exaggerating the extent of persecution if they don’t understand how it’s being measured as well as overemphasizing the plight of Christians while neglecting the plight of non-Christian minorities.

“In general, I think the World Watch List is a useful and engaging way to encourage lay Christians to support and pray for their persecuted brothers and sisters around the world,” he told CT by email.

“It’s useful to have lots of religious freedom reports coming from lots of different perspectives so that we can engage a variety of audiences and come to a fuller understanding of a complicated, multi-faceted global problem,” Birdsall added. “No one report can capture all of that complexity.” He noted that though the report illuminates suffering by fellow Christians, its scope doesn’t allow believers to also consider places where Christians “exacerbate social tensions and even condone discrimination.”

“To focus only on the suffering of Christians is to miss that crucial dimension of international religious persecution and intolerance,” he said.

Open Doors mentioned how persecution in certain countries is a fate believers share with other religious minorities, including in two of the countries that actually made significant progress toward religious freedom in the past year: Iraq and Malaysia.

Iraq dropped out of the top 10 to No. 13, due to the retreat of ISIS from the country, which led to a drop in persecution across the board. Meanwhile Malaysia’s new political coalition was celebrated by Christians and other minorities after its unexpected victory in 2018. The newly elected Pakatan Harapan even appointed a Christian, Tommy Thomas, as attorney general.