"I know it sounds cruel, but if he's going to do something he should divorce her and start all over again," broadcaster advises on 700 Club.
Tobin Grant|September 14, 2011 01:58 PM

Pat Robertson advised a viewer of yesterday's 700 Club to avoid putting a "guilt trip" on those who want to divorce a spouse with Alzheimer's. During the show's advice segment, a viewer asked Robertson how she should address a friend who was dating another woman "because his wife as he knows her is gone." Robertson said he would not fault anyone for doing this. He then went further by saying it would be understandable to divorce a spouse with the disease.

"That is a terribly hard thing," Robertson said. "I hate Alzheimer's. It is one of the most awful things because here is a loved one—this is the woman or man that you have loved for 20, 30, 40 years. And suddenly that person is gone. They're gone. They are gone. So, what he says basically is correct. But I know it sounds cruel, but if he's going to do something he should divorce her and start all over again. But to make sure she has custodial care and somebody looking after her."

Co-host Terry Meeuwsen asked Pat, "But isn't that the vow ... 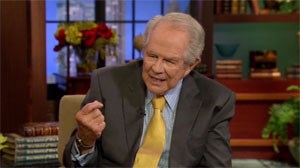