(UPDATED) The King's College has selected Gregory Alan Thornbury as its new president.
Melissa Steffan|July 11, 2013 10:32 AM

Update (July 11, 2013): The King's College (TKC) has announced that its board of trustees has selected Gregory Alan Thornbury as the school's next president. Thornbury previously served as professor of philosophy and as founding dean of the School of Theology at Union University in Tennessee. 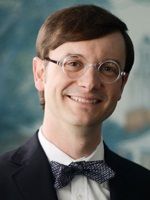 Image: Courtesy of The King's College

According to a statement from TKC, interim president Andrew Mills, who has been serving in his current role since Dinesh D'Souza's high-profile resignation last November, said Thornbury possesses "a clear understanding of the challenges and opportunities facing higher education.... He has also demonstrated innovative leadership and a breadth of experience that will allow him to guide King's through a period of unprecedented growth and expanding influence for Christ and His Kingdom."

(This post has been updated to include the official statement from The King's College board of trustees.)

Dinesh D'Souza, president of The King's College and a well-known evangelical author, faces questions from his board over his relationship with a woman he introduced as his fiancee in late September, according to World magazine.

The problem? D'Souza, who has experienced a "meteoric rise in the evangelical world," is still married to his wife of 20 years, Dixie.

World reports that D'Souza and his wife filed for divorce on Oct. 4, but D'Souza appeared at a September speaking event in South Carolina with a "young woman, Denise Odie Joseph II, and introduced her to at least three people as his fiancée."

On Oct. 16, The King's College issued the following statement: "The Board of Trustees of The King's College has, in recent days, learned that details of the personal life of our president, Dinesh D'Souza, including information about admitted difficulties in his marriage, would be published in a national magazine. While our board has been aware of some of these details, we were not aware of others and immediately met in special sessions as a board, with Dinesh, to learn what we could about this situation."

The King's College board plans further discussion at a regularly scheduled meeting on Oct. 17 and 18 but stated, "Until we complete this internal process we do not intend to publicly address any matters related to Mr. D'Souza and his relationship with the College."