Sojourners founder: 'I think we have to talk about, now, how to include same-sex couples in that deeper understanding of marriage.'
Melissa Steffan|April 9, 2013 10:26 AM

Jim Wallis, founder and CEO of Sojourners, has reversed course from the traditional-marriage position he defended to CT in 2008, joining a recent string of Christian public figures voicing support for same-sex marriage.

In an interview with the Huffington Post, Wallis said he now supports same-sex marriage as part of the ongoing conversation about how to "commit liberals and conservatives to re-covenanting marriage, reestablishing, renewing marriage."

"I think we have to talk about, now, how to include same-sex couples in that deeper understanding of marriage," Wallis said. "I want a deeper commitment to marriage that is more and more inclusive, and that's where I think the country is going."

That's a recent shift from 2008, when Wallis told CT he didn't believe in same-sex marriage. "I don't think the sacrament of marriage should be changed," he previously told CT. "Some people say that Jesus didn't talk about homosexuality, and that's technically true. But marriage is all through the Bible, ... 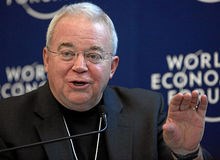