Countries had complained about coin intended to raise awareness of 9th-century missionaries.
Melissa Steffan|July 3, 2013 09:45 AM

Slovakia will issue its commemorative Euro depicting two Christian saints later this week, nearly two months after the coins were expected to roll out.

First set to be released in May, the coins depicting Cyril and Methodius faced an unexpected delay last winter when the European Commission intervened. The European Commission, which is the EU's governing branch, told the National Bank of Slovakia (NBS) last year that it would need to re-design the coins and remove religious symbols, including halos and a cross-adorned stole.

The NBS said it would comply with the Commission's order, though iconography and art of canonized saints traditionally includes halos. The two men, who were missionaries to the Slavs in the ninth century, are recognized as saints by Orthodox, Catholic, Lutheran, and Anglican churches.

NBS says the final design of the Euros, which will begin circulating July 5, "represents a dignified joining of two symbols—the symbol of statehood and the ... 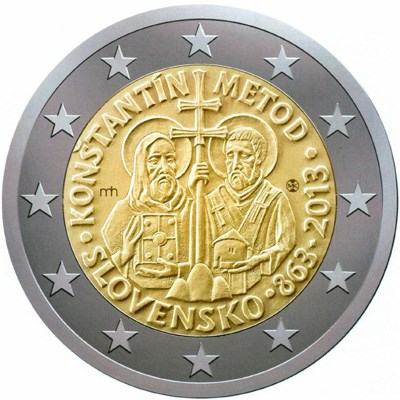